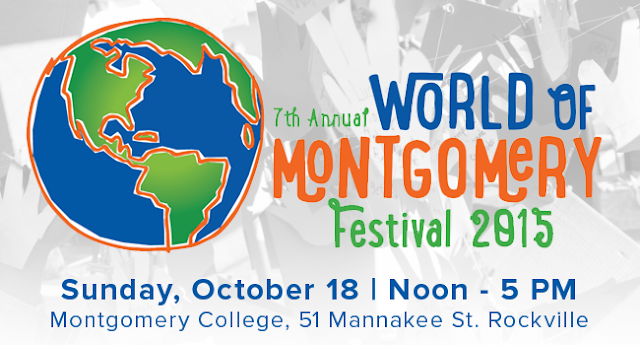 The free festival includes an international village, a global kitchen with chef demonstrations of traditional ethnic food, a craft market, a Parade of Cultures, two performance stages of traditional dance and music, traditional arts and fun interactive activities for the whole family.


For more information on the festival visit worldofmontgomery.com. 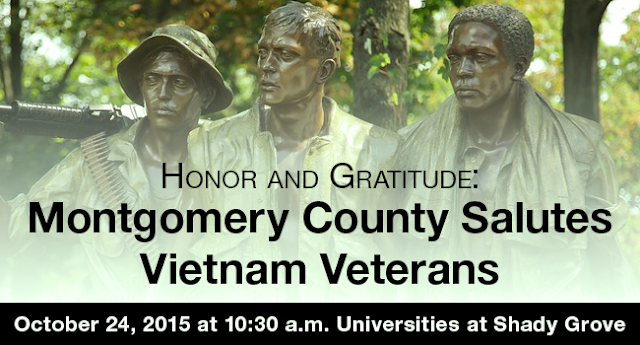 Tom Murphy, a Rockville attorney and County resident who was seriously wounded in Vietnam and recovered in nearby Walter Reed Army Hospital, will be among the featured speakers on Saturday, October 24 at a ceremony to salute Montgomery County’s more than 13,000 Vietnam veterans. The ceremony will take place at the Universities at Shady Grove, 9630 Gudelsky Dr., Rockville at 10:30 a.m.

County Executive and Vietnam veteran Ike Leggett, Council President George Leventhal and other Councilmembers will lead the ceremony. Bob Schieffer, who recently retired as host of the CBS show Face the Nation, will serve as host and guest speaker. The event will be recorded and broadcast on many of the public cable television channels that compose the County’s PEG (Public, Education, Government) media organization, which is hosting the event. In addition, the PEG organization will be recording the stories of many of the veterans for a documentary.

Event organizers are currently seeking Vietnam veterans. Veterans, or family and friends of veterans, interested in the event should call 301-424-1730 / ext. 350.

For more information about the ceremony go to www.mocovietnamvets.org.
at 3:37 PM

Situated on eight acres adjacent to the Germantown Library, the new park includes many unique features such as:
Read more about the park at Germantown Town Center Urban Park
at 3:35 PM

County Executive Isiah Leggett and Mrs. Leggett will honor nine community leaders for their contributions to the County’s art and cultural community at the Annual County Executive’s Awards for Excellence in the Arts and Humanities. This event will be held Monday, October 26 at 7 p.m. at the Cultural Arts Center, Montgomery College Takoma Park/Silver Spring. Reserve your free tickets from 2015executivesawards.eventbrite.com.

Now in its 14th year, the awards recognize individuals and organizations that have made a difference in Montgomery County through the arts and humanities. There will be performances by Maryland Classic Youth Orchestras at Strathmore, Sutradhar Institute of Dance and Related Arts and other local artists.

For more information, or to order tickets visit: www.creativemoco.com/executives-awards.
at 3:33 PM

The Montgomery County Department of Transportation (MCDOT) has won a $300,350 Maryland Bikeways Program grant from the Maryland Department of Transportation (MDOT) to establish a six-station Bikeshare network in Wheaton. The grant will cover the purchase of the stations and bikes and the installation of the stations. The grant is the second Bikeshare grant MCDOT has received in the last three years.

A Wheaton Bikeshare network is expected to assist with making the community a bikeable, walkable, smart growth community. MCDOT is leading the effort to replace the County-owned Wheaton Triangle Parking Lot with a government office building, town square and underground public parking to boost Wheaton’s economic development, contribute to its renewal and improve environmental quality.

The Bikeshare program provides travelers interested in biking the option to rent a bike from on-street stations and drop it off at other stations within the bikeshare network. MCDOT has installed a 51-station Bikeshare network inside the Beltway in Friendship Heights, Bethesda, Medical Center, Takoma Park and Silver Spring and in the Rockville and Shady Grove/Life Sciences Center areas. The entire project is expected to be completed by the end of 2016.

Jessica Henriquez, MC 311 Customer Service Representative, answered a milestone telephone call when she responded to a routine service request on September 30. The caller, who was requesting information on the hours for the Treasury Office, marked the Call Center’s three-millionth service request.

The MC311 system, launched on June 17, 2010, implemented the centralized Customer Service Center (CSC) to enhance public access to community services with one easy-to-remember number and a website available 24/7. Since the CSC opened, call volume has averaged 40,000 calls per month. The MC311 Online Request System, www.MC311.com, which allows residents to find answers and check on the status of service requests, has consistently averaged 25,000 views per month.
at 3:28 PM

Email ThisBlogThis!Share to TwitterShare to FacebookShare to Pinterest
Labels: 311

On September 11, representatives of Zhongshan City, China and Montgomery County, Maryland, signed a Memorandum of Understanding launching an economic development relationship between the two jurisdictions.

Through the agreement, the two authorities agree to actively support the other’s “efforts to promote culture, art and education exchanges,” including travel programs for members of their respective communities.

The document was signed on behalf of the County by County Executive Ike Leggett and County Council Vice President Nancy Floreen. Signing for Zhongshan City were its mayor, Liangxian Chen, and the director of its business bureau, Jinquan Ouyang. A number of representatives from both the city and county were on hand to witness the signing.

Zhongshan is a city of three million located in the southwestern portion of the People’s Republic of China. It is in the Guangdong Province in the Pearl River Delta. Largely an agricultural area, Zhongshan’s main crops include bananas, sugar cane, rice and lychee. Its proximity to Hong Kong provides the city with a strategic location for economic development.
at 3:27 PM

The Department of Health and Human Services (DHHS) is holding a community forum to gather input from the public on the department’s FY2017 operating budget.

The forum will be held on Monday, October 26 from 6 to 8 p.m. at the Children’s Resource Center in Rockville. DHHS Director Uma Ahluwalia will review the department’s priorities. Following the briefing, participants will have an opportunity to help identify services that will help ensure the department’s goal of building a safe, healthy and strong community.

For more information on the forum email: CommunityBudget.Forum@montgomerycountymd.gov.
at 3:23 PM

MobileMed's mission is to improve the health of low-income people who face the greatest barriers to care access. Offering 15 clinics throughout Montgomery County, MobileMed provides primary and preventive care, referrals to specialty care as necessary, and the diagnosis and management of chronic conditions for patients who require ongoing healthcare oversight. They offer a network of in-house specialty clinics—including cardiology, orthopedics, pulmonology, and podiatry—which are available to all MobileMed patients who have been referred by their MobileMed primary care providers.
at 3:20 PM

Email ThisBlogThis!Share to TwitterShare to FacebookShare to Pinterest
Labels: Health 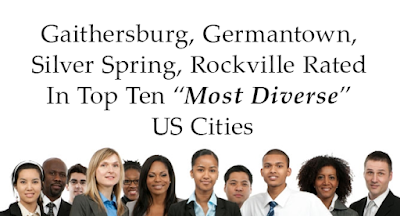 Montgomery County’s rich cultural diversity was recognized in a Wallethub study which identified Gaithersburg as the nation’s most ethno-racially and linguistically diverse site. Germantown was ranked as the third, Silver Spring as the eighth and Rockville was number 10.

The study compared 313 of the most populated U.S. cities using three key metrics: racial and ethnic diversity, language diversity and U.S. region-of-birth diversity. The recent analysis underpins Montgomery County’s commitment to be a community which values and welcomes cultural differences and backgrounds.

To view the complete report, visit website.
at 3:20 PM


Montgomery County Cable and Public Libraries (MCPL) have launched a new bi-monthly program called “Check Us Out” that showcases the variety of library services available to residents of all ages. 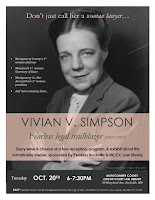 In the 1920s, Vivian Simpson (1903-1987) overcame discriminatory obstacles to become the first female attorney in Montgomery County. She practiced in Rockville until her retirement in 1980. Join Peerless Rockville and the Montgomery County Circuit Court (MCCC) Law Library on Tuesday, October 20 from 6 to 7:30 p.m. at the MCCC Law Library to learn about this remarkable woman, view an exhibit on her life, and hear remembrances of her colleagues. Wine and cheese will be served. RSVP: info@peerlessrockville.org or call 301-762-0096. The event is free and open to the public.
at 3:07 PM

After the tour, enjoy refreshments and conversation with Karen Yaffe-Lottes and Dorothy Pugh, authors of In Search of Maryland Ghosts of Montgomery County, who will be on-site autographing books and answering questions about local lore.

Cost for the tour is $10 for Peerless Rockville members and $15 for non-members. Though reservations are not required, space is limited and may fill quickly. Reserve your spot here: Montgomery County Historical Society Ghost Tour
at 3:00 PM