Montgomery County government will observe the following holiday schedule for Labor Day on Monday, September 1:
*Collection provided one day later for remainder of week (last collection day is Saturday).
at 10:22 AM

Email ThisBlogThis!Share to TwitterShare to FacebookShare to Pinterest
Labels: Holidays

Town of Brookeville, US Capital for a Day, Plans War of 1812 Bicentennial Commemoration – Re-enactors Include County Executive, Governor

Located about 20 miles north of the District of Columbia, the Quaker Town of Brookeville played a significant role in local and national history during the British occupation of Washington as “United States Capital for a Day” on August 26, 1814.

In the days before the invasion, Washingtonians – including President James Madison and his staff – sought refuge in the town. Washington’s banks brought their money and a Senate clerk brought the government’s documents to Brookeville for safekeeping.

To commemorate the War of 1812 Bicentennial, visitors and local residents can relive that historic period during a weekend-long, free event, in and around town, on Saturday, August 30 from 10 a.m. to 7 p.m. and on Sunday, August 31 from noon to 6 p.m. Both County Executive Ike Leggett and Governor Martin O’Malley will participate in the re-enactment of President Madison’s stay in Brookeville – Leggett portraying Attorney General Richard Rush and O’Malley, General John Mason.

Georgia Ave .will be closed to all but pedestrians and horses during the event on Saturday and Sunday. Transportation in and out of town will be by free, handicapped accessible-shuttle buses from satellite parking areas at Camp Bennett (20501 Georgia Ave., Brookeville) and MedStar Montgomery Medical Center’s construction lot (across from 18101 Prince Phillip Dr., Olney). Parking is free at both sites. Shuttle service will also be provided from the Glenmont Metro station.

No dogs except service dogs will be allowed on the shuttle buses. Golf carts will take attendees who are unable to walk comfortably from the shuttle stops to activities.

Get information about road closures and detours around Brookeville.

Following is the schedule for this year’s festival:
Attendees are encouraged to use public transportation – the Silver Spring Metro (Red Line) is two blocks away – and to bring folding chairs. Limited parking is available in the Wayne Avenue garage, the Town Square garage, and the garages on Bonifant Street, Cameron at Ramsey Avenue and Cameron at Fenton.

The HTTF was appointed by County Executive Ike Leggett to explore possible new County legislation to combat human trafficking, raise awareness of the forms human trafficking takes in the County and review ways to improve services provided by the County to victims of trafficking.

For more information about the hearing, or to be placed on the speakers’ list, call Mike Subin in the Office of the County Executive at 240-777-2530 or Lori Lee-Savage, 240-777-2522. The speakers’ list is limited to 25 speakers, with three minutes allotted for individuals and five minutes for organizations. Speakers are asked to provide 15 copies of their testimony at the forum.

Sign language interpreter services will be provided upon request with notice as far in advance as possible, but no less than 72 hours prior to the event. If these or other services or aids are needed to participate in this activity, call 240-777-8302 or MD Relay 711 or email a request to chickona.royster-edwards@montgomerycountymd.gov.

Now that Montgomery County Public Schools are back in session, residents are reminded of the County’s School Bus Camera Enforcement Program.

Maryland law requires that when approaching a stopped school bus with activated Stop sign and flashing red lights traffic from both directions must stop and remain stopped until the Stop sign and lights are deactivated.

To help enforce the law, last January the County began implementing an automated school bus camera enforcement program that allows the cameras to be moved throughout the County as needed. Violations are reviewed by the Police Department’s Automated Traffic Enforcement Unit, and citations are mailed to the registered owner.

The fine from the automated enforcement is $125 and no points. If a driver is stopped by a police officer for passing a stopped school bus with flashing lights, the fine is $570 and three points.

County Police also remind drivers of the importance of obeying the posted speed limit and paying close attention to their surroundings at all times.
at 10:16 AM

The Department of Permitting Services' (DPS) award-winning online services for ePermits and ePlans are rapidly expanding.

ePlans, the newest addition to DPS’ online services, gives site users the ability to submit documents to DPS, track the review status and make changes. DPS staff review the plans, make comments, ask for additional information and approve the plans electronically. Currently, customers are required to attend a training session prior to creating an ePlans account. Training dates can be found at the ePlans link.

Watch a short video about benefits of e-plans.
at 10:15 AM

Registration is available by mail or fax, online or in person at the Montgomery County Recreation Administrative Offices at 4010 Randolph Rd., Silver Spring.

Print copies of the guide are now available at recreation centers, park facilities, government buildings and public libraries. Residents who prefer to receive the guide by mail can subscribe for $5 and receive a full year of all five issues (Summer, Fall, Winter, Summer Camps and Spring).

To view the guide online, or to sign up for a subscription, go to www.montgomerycountymd.gov/rec.

Teens, ages 14 to 18, who like to read and write and would be interested in perhaps interviewing authors and public officials are encouraged to apply. Any teens interested in doing social media, YouTube and video productions, and setting up teen events in branch libraries should also consider applying.

Teens can apply online or obtain a paper copy at their MCPL branch library. Applications are due by September 5, and qualified candidates will be interviewed in September.

More details are available at on the Teensite or by emailing teensite@montgomerycountymd.gov.
at 10:12 AM

A variety of special events, festivals and programs are taking place during September in
Montgomery Parks, part of the Maryland-National Capital Park and Planning Commission.

Programs range from a pawpaw festival and nighttime fishing to a bluegrass concert and celebration of the monarch butterfly.

Fall events are listed in the Montgomery County Guide to Recreation and Parks Programs, online at www.MontgomeryParks.org/guide and in print at select Parks and Recreation facilities, government buildings and public libraries, while supplies last.
at 10:09 AM

Rockville Company to Receive $750,000 from InvestMaryland

The Maryland Venture Fund (MVF), the equity investment arm of the Maryland Department of Business and Economic Development will invest $750,000 in Triumfant, a leading provider of advanced threat detection and remediation technologies located in Rockville.

Triumfant offers large commercial enterprises and government entities continuous protection against next-generation malware attacks, including advanced persistent threats, targeted attacks, in-memory attacks and zero-day attacks. The company has been identified by Gartner as one of the leading providers of endpoint security solutions.

The Maryland Venture Fund is a regionally recognized leader in seed and early-stage investing and a national model for state-supported investment programs.
at 10:08 AM 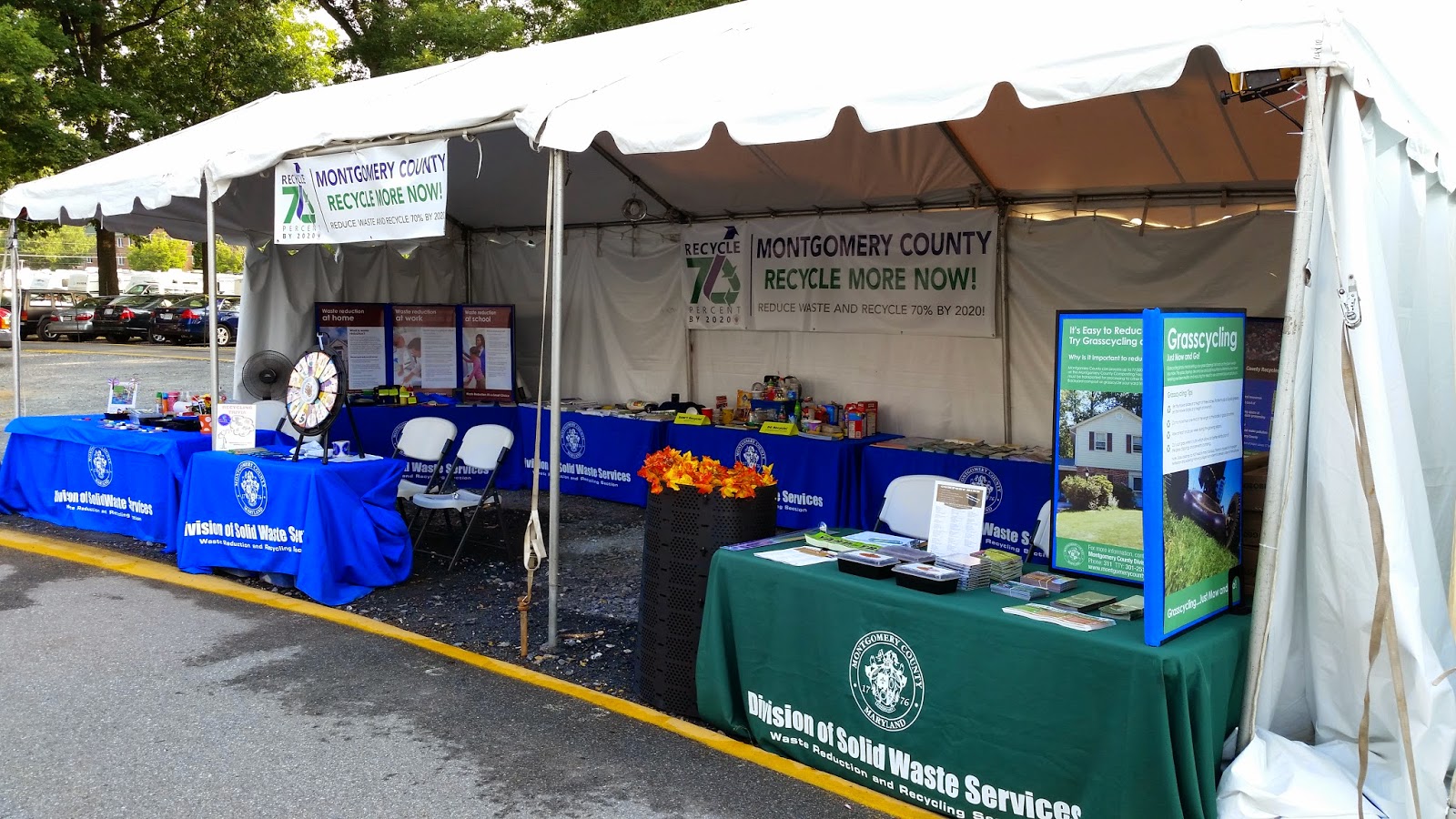 Each year, the Montgomery County Agricultural Fair presents awards to commercial vendors based on a number of criteria, including overall appearance and interaction with patrons. A panel of judges evaluates all of the vendors/exhibitors and awards nine ribbons in the commercial exhibitor category.

This year, the County’s Division of Solid Waste Services (Dept. of Environmental Protection) received the Grand Champion Educational Award.
at 10:07 AM

Montgomery County’s Project SEARCH program has been recognized for achieving a 70 percent hire rate for its class of 2012-13 with an Employment Outcome Award presented at the Eighth Annual Project SEARCH conference in Omaha, NE.

Project SEARCH Montgomery targets individuals whose main goal is competitive employment and who will benefit from an extensive period of training, long-term job coaching and continuous feedback from teachers, job coaches and employers.

The program is a key component of County Executive Ike Leggett’s commitment to increasing opportunities for persons with significant disabilities to work in Montgomery County government.

For more information about other disability hiring programs in Montgomery County Government, visit the Office of Human Resources (OHR) website, contact the OHR Targeted Recruitment Specialist at 240-777-5091 or email Special.accommodations@montgomerycountymd.gov.
at 10:06 AM

The Walmart at 20910 Frederick Rd. in Germantown has awarded the Montgomery County Police Department a $2,000 grant through the Walmart Community Grants Program.