Beginning Wednesday, July 25, the buses will operate on a normal schedule. However, riders are advised that some delays may occur.
This change in Ride On’s schedule was activated when all of Ride On’s Champion buses were permanently removed from service recently due to safety concerns.
at 1:00 PM

Email ThisBlogThis!Share to TwitterShare to FacebookShare to Pinterest
Labels: Ride On, Transportation

The Storm and Pepco

That would be truckload after truckload of tree debris from the derecho that struck our area on June 29 arriving daily at the County’s Processing Facility and Transfer Station. There are still about 600 - 700 vehicles/day dropping off above-average amounts of large tree debris.
All in all, more than 80,000 cubic yards have come into the Transfer Station, alone, since the storm. Enough, so far, to fill about 1,000 53-foot tractor trailers.
And, still, there’s more to come.
at 12:00 PM

Email ThisBlogThis!Share to TwitterShare to FacebookShare to Pinterest
Labels: Storm

The Montgomery County Office of Consumer Protection (OCP) warns county residents to be cautious when hiring contractors to repair damage caused by the recent severe storm and advises consumers to do their homework before signing a contract for any home repair or improvement, or tree service work.

Among the tips offered to residents by OCP are:
Don’t panic and hire someone because they are the only company that can come out to the house right away. Make sure the home improvement contractor is licensed with the Maryland Home Improvement Commission (MHIC) by calling 410-230-6309 or check online.
For tree service or removal, check to see if the business is a licensed tree expert with the Maryland Department of Natural Resources ( DNR), Forestry Division at 410-260-8521 or online at www.dnr.maryland.gov.
See more tips and details.
at 11:00 AM

Office of Consumer Protection (OCP) Director Eric Friedman will conduct a live, online chat on Tuesday, July 24 from noon to 2 p.m. that will focus on the recent storm damage and the resulting proliferation of unlicensed home improvement contractors.

To participate, residents can enter questions prior to or during the live discussion.
Questions and answers will be available for viewing both during and after the chat.
The online discussion is part of the “Consumer Ed Café…Food for Thought” series of online chats conducted by OCP.
For more information, call the Office of Consumer Protection at 240-777-3636.
at 10:00 AM

GET THE FACTS: About the Emergency Transportation Insurance Reimbursement

Email ThisBlogThis!Share to TwitterShare to FacebookShare to Pinterest
Labels: EMTs

A Cornucopia of Family Fun, Farm Life and Fresh Produce

Spend a day or two in the country petting farm animals or having lunch by a scenic pond. Purchase fresh fruits, vegetables, flowers, plants and more.

You and your family can experience all this and more right here in Montgomery County during the 23rd Annual Farm Tour & Harvest Sale , Saturday July 28 and Sunday July 29. All farms will be open from 10 a.m. to 4 p.m., except Sugarloaf Winery that will be open from noon to 6 p.m.
See more details and a list of the participating farms at www.montgomerycountymd.gov/farmtour.
at 8:00 AM

Email ThisBlogThis!Share to TwitterShare to FacebookShare to Pinterest
Labels: Economy

Governor Martin O’Malley and Lt. Governor Anthony G. Brown joined Montgomery County officials, including County Executive Ike Leggett and private sector partners, for the groundbreaking.
The Pike & Rose project will be built by First Realty Investment Trust. Ultimately, it will transform 24 acres of asphalt parking lots and an auto-oriented strip retail center into a vibrant, walkable community with housing, retail, office and public spaces located close to the White Flint Metro Station.
Leggett said, “The Pike & Rose groundbreaking, part of the White Flint Transit Oriented Development Plan, represents another successful public-private partnership taking place here in the County. This effort will bring with it new jobs, tax revenue and increased transit ridership – all the elements you look for in an environmentally friendly, smart growth development.  I join with the governor and lieutenant governor in congratulating Pike & Rose, First Realty Investment Trust and the entire team on this important milestone in the transformation of White Flint.”
As part of the County’s plans to concentrate transit-oriented development around the White Flint Metro Station, the State and the County co-designated the White Flint Sector Plan area as a TOD.
The overall plan allows for 17.6 million square feet of development, which would generate $6.9 billion in tax revenues over 30 years. Currently in the White Flint area, about 26 percent of people commute by transit, biking and walking. Under the White Flint Sector Plan, that percentage is projected to nearly double, reaching 50 percent after implementation.
Read the full news release.
at 7:00 AM


On the Way to London: Olympic Dive Team Makes a Splash in County

Local media and residents had a couple of unique opportunities to see the U.S. Olympic Team–Diving during the four days of training sessions held in the County before the team departed for the 2012 Summer Olympics in London.
Montgomery County Recreation hosted a media-only training session for the team on July 14 at the Eunice Kennedy Shriver and Sargent Shriver Aquatic Center in North Bethesda. Members of the media filmed and interviewed team members during the session.
The following day, the Olympians participated in a special exhibition at the Germantown Indoor Swim Center. In addition to elected officials and residents, the full-house audience included Olympic Champion diver Greg Louganis, who is serving as a mentor to the US team.
Inside word has it that the team was very happy with the facilities here in Montgomery County and that they were accessible and friendly to both Recreation staff, other swimmers and the public, in general, signing autographs and talking with young people.
See the team in Montgomery County on YouTube.
Gazette Editorial Commends County’s “Latest Milestone” in Recycling 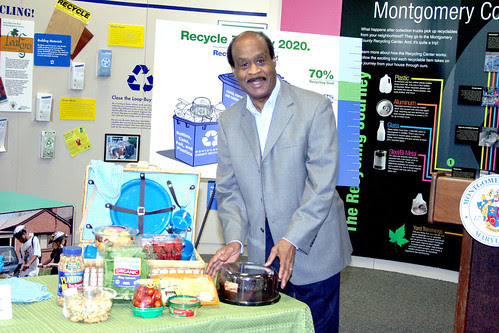 In the past 60 days, the County has taken two more giant steps to enhance its reputation as a local leader in recycling efforts.
The first step came in May when County Executive Ike Leggett announced establishment of a new, higher recycling goal -- 70 percent of the waste stream being recycled by the end of 2020. The new goal would be one of the highest among jurisdictions in the metropolitan region, as well as other counties across the United States.
The second step came at the end of June when the Executive announced that residents of single-family homes receiving County recycling pick ups can now add PET thermoform plastics to their recycling bins. [See photo.]
PET plastic is used to make items such as cups and rigid packaging. It is a transparent, lightweight, strong, safe, shatterproof and recyclable packaging material commonly used to package fresh fruits and vegetables, bakery items, prepared foods and salads, and deli items.
Both announcements were lauded by The Gazette in a July 11 editorial entitled “Recycling strides.” Adding clamshell containers, the editorial stated, “is the latest milestone in the county’s recycling program which is getting even more ambitious after the county executive raised the goal on how much of the county’s trash…should be recycled by 2020.”
Read the full editorial.

Correction and Rehabilitation Program Featured on Channel 7
Turning lives around is more than a phrase at the County’s Correctional Facility in Clarksburg.
It’s a fact, thanks to a comprehensive work program that teaches life skills to inmates learning how to make new starts for themselves.
ABC 7 News (WJLA) recently detailed the program, a dedicated career coach and the positive impact both are having on inmates.
Watch and/or read the story.
at 5:00 AM

How to be Cool (and Safe) When it’s Hot

With a summer filled so far with higher than average temperatures, Montgomery County health officials encourage residents to keep in mind places where they can stay cool and to take precautions to avoid heat-related illnesses.

Most at risk are young children, the elderly and people with health problems, such as asthma, who are susceptible to heat-related illnesses like heat stroke and exhaustion.
Libraries, recreation centers and pools are good places to cool off, along with shopping malls and movie theaters.

Residents with questions about specific locations and hours of operation should call 311.
By taking a few precautions, residents can remain safe and comfortable during summer heat waves:
Also, knowing the symptoms of heat exposure can prevent a serious heat illness from becoming life threatening.
For more information on ways to beat the heat, go to the U.S. Centers for Disease Control and Prevention (CDC) website.

The new signal, at the intersection of Claridge and Veirs Mill Rds. (Maryland Route 586), will help protect pedestrians crossing multiple lanes of traffic.

Between 2003 and 2008, 70 accidents occurred at the intersection bordered by St. Catherine Laboure Parish and a highly utilized bus stop.  Three of the accidents resulted in fatalities.

Installation of the traffic signal is the culmination of a multi-year effort by residents, members of the County delegation to the Maryland General Assembly and Councilmember Valerie Ervin, with strong support from Councilmembers Nancy Floreen and Nancy Navarro.

Residents and other interested users can find population-based data and information about community health and the social and environmental determinants of health for Montgomery County online at Healthy Montgomery’s website www.healthymontgomery.org.

The site provides data and information on more than 90 topics related to the health and well being of the community and its residents.
Facts on the site include:

July 26 -- Silver Spring Swings concert series: The Eddie Becker Band, Rock, Soul and R&B. 7 to 9 p.m. Veterans Plaza at the Silver Spring Civic Building, Ellsworth Dr. and Fenton St .  Performances canceled due to weather only if it is raining at 7 p.m. Performance features a mix of oldies, soul music, rock, R&B, jazz, blues and originals.  The band is a cooperative of musicians from throughout the Mid-Atlantic region. The series features a raffle that opens at 6:30 p.m. and is awarded during intermission. Also, prizes for adults, plus toys and gifts for kids. Presented by Discovery Communications, with the support of Montgomery County Recreation, the Silver Spring Urban District and The Gazette Newspapers. Call 240-777-6821 or visit www.montgomerycountymd.gov/rec.

August 2 – Silver Spring Swings concert series: Big Sur, Traditional Rock and Roll. 7 to 9 p.m. Veterans Plaza at the Silver Spring Civic Building, Ellsworth Dr. and Fenton St.  Performances canceled due to weather only if it is raining at 7 p.m. Big Sur has been playing traditional rock and roll for more than 10 years.  The series features a raffle that opens at 6:30 p.m. and is awarded during intermission. Also, prizes for adults, plus toys and gifts for kids. Presented by Discovery Communications, with the support of Montgomery County Recreation, the Silver Spring Urban District and The Gazette Newspapers. Call 240-777-6821 or visit www.montgomerycountymd.gov/rec.

Sunday, August 5 – Salvadoran American Festival, 2424 Reedie Dr., Wheaton. Noon – 6 p.m. The free event will include the 1st Annual Latino Health Fair, providing health screenings and information in Spanish on how to access state and community-based services. Renew a passport through the Salvadoran Consulate. Enjoy traditional foods, crafts, activities for children and live music. Contact Elizabeth Ortega at 240-777-6973 or 240-370-8351 (cell) or visit www.cotsa.org.
at 4:00 AM