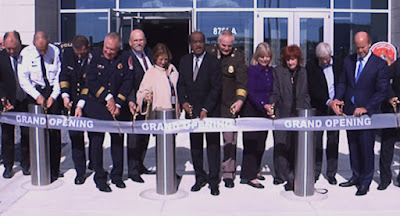 The new PSTA is part of the Montgomery County Multi Agency Service Park (MASP). The opening marked the completion of the eighth project and final construction of a new facility in Leggett’s Smart Growth Initiative (SGI). County Executive introduced the SGI in 2008 to provide critically needed public facilities by leveraging County-owned land for use in job creation and in providing transit-oriented housing.

The former PSTA located at 9710 Great Seneca Highway in Rockville, was completed in 1973. Since then, the training needs of public safety agencies have shifted significantly. For more information on the PTSA Ribbon Cutting Ceremony. 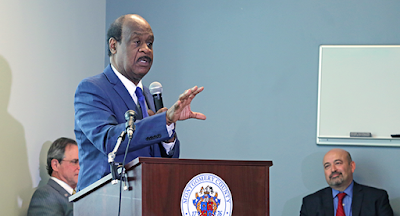 Montgomery County Executive Isiah Leggett detailed the County’s plans for the upcoming snow season at the Snow Summit held on November 2. The event included all County agencies with snow removal responsibilities to assess and prepare for the possibility of winter storms. New initiatives this year included a revised online portal that provides snow information in a more user-friendly format and a pilot project that will compare the effectiveness of salt brine versus salt in treating 18 miles of roads. If salt brine is proven to be as effective, MCDOT could reduce the amount of salt required for winter storm treatment, which would also benefit environmental quality. The Snow Summit Presentation is available here.
at 10:26 AM

Email ThisBlogThis!Share to TwitterShare to FacebookShare to Pinterest
Labels: snow 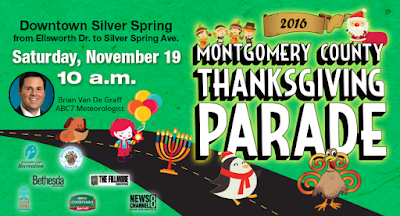 The 19th Annual Montgomery County Thanksgiving Parade will step-off on Saturday, November 19 at 10 a.m. This year’s parade will feature three Broadway-style performance excerpts of “Annie” and Tchaikovsky’s “The Nutcracker Suite,” as well as over 100 units, including marching bands, floats and inflatables. The parade route will travel from Ellsworth Drive and Fenton Street in downtown Silver Spring, south on Georgia Avenue to Silver Spring Avenue.

Email ThisBlogThis!Share to TwitterShare to FacebookShare to Pinterest
Labels: Recreation 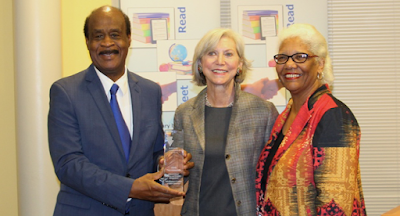 It would have taken 32 years and $203 million to renovate 16 MCPL buildings as allowed under the County’s current Capital Improvement Program (CIP) budget.

However, the “refresh” program cuts the total cost to $20 million for all 16 libraries. In the 32 years it would have taken to renovate each branch once, the branches can be refreshed three or four times.

The “refresh” process generally takes about 18 months, with a branch closed for only five to seven months, as opposed to multiple years under the traditional approach. Twinbrook and Kensington libraries are the first branches to have gone through the refresh program.

For more about the Top Innovator Award refresh program go to http://www2.montgomerycountymd.gov/mcgportalapps/Press_Detail.aspx?Item_ID=17490
at 9:53 AM 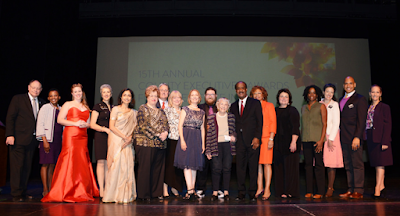 On Monday, October 24, community and cultural leaders were recognized for their inspiring achievements and work in the local arts and humanities community at the 15th Annual County Executive Awards for Excellence in Arts and Humanities. During the awards ceremony at the Montgomery College Cultural Arts Center, County Executive Ike Leggett honored the nine award winners. The with the most prestigious awards were conferred to individual artists, scholars, organizations and cultural patrons in Montgomery County.

See Photos from the Awards Ceremony shared by The Arts and Humanities Council of Montgomery County.

To read more about the ceremony go to http://www.creativemoco.com/about-ahcmc/newsroom
at 9:51 AM

On November 4, Montgomery County joined other regional partners in Maryland, D.C. and Virginia to kick-off the annual fall Street Smart pedestrian safety campaign. Safety experts warn that the end of daylight saving time this month will bring darker evening commuting hours and greater risks for pedestrians and bicyclists. Last year in November and December, crashes involving pedestrians in the region spiked with more than 550 incidents, 21 percent higher than average. Safety is a shared responsibility between drivers, pedestrians and bicyclists. Please take a moment to read these important safety tips at press release.
at 9:49 AM

Department of Liquor Control Has Once Again Brewed Up Cost Savings

The Department of Liquor Control (DLC) has partnered with Legends Limited of Maryland to reduce the cost of kegs of several varieties of beer. The price reduction began November 1. While the price reductions vary depending on brand, the average decrease per keg is 11 percent.

The breweries/brands that will see price reductions are:
DLC is continuing to work with suppliers and wholesale partners to negotiate the best pricing available for licensees and customers.
at 9:47 AM 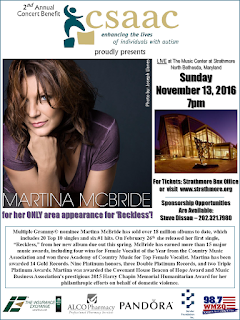 Community Services for Autistic Adults and Children (CSAAC) is a nationally recognized Montgomery County based non-profit organization that provides lifespan support for individuals impacted by autism.

Award-winning country music star, Martina McBride will perform a 90-minute show of her greatest chart-topping hits and new music from her new album Reckless with all ticket proceeds benefitting CSAAC.

After the show, everyone is invited to stay for the live auction – the Martina package includes: an authentic and autographed tour jacket, autographed CD, autographed promotional poster and an autographed picture!

Email ThisBlogThis!Share to TwitterShare to FacebookShare to Pinterest
Labels: Calendar

The Charles W. Gilchrist Center for Cultural Diversity has changed its name to the Charles W. Gilchrist Immigrant Resource Center. The name change will better reflect what the Center has become in the past 15 years. The Center welcomes immigrants and connects them to programs and services. It helps to strengthen their life skills through English and basic computer classes, and increase their knowledge to prepare for civic life and/or U.S. citizenship. The Gilchrist Immigrant Resource Center serves as a community where residents can contribute their talents to help others, and is a testament to the County’s commitment to building one of the world’s most welcoming communities.

In celebration of their 15th Anniversary, the Gilchrist Immigrant Resource Center has released its 15th anniversary report, and a new resource guide, in English and Spanish.
at 9:42 AM

Email ThisBlogThis!Share to TwitterShare to FacebookShare to Pinterest
Labels: immigrant

For more information about the event go to http://www.montgomeryparks.org/events/community-meeting-outdoor-tennis-court-use-policy/
at 9:38 AM