According to the executives, their three counties make up 44 percent of the state's student population and 46 percent of the students that participate in the state's Free and Reduced Price Meals (FARMS) program. In addition, the combined student enrollment in the three school districts is projected to increase by more than 30,000 students by 2021.

The executives stated that they have committed hundreds of millions of dollars in local funding for school renovation and construction projects over the past three years despite budget challenges. They pledged that they are prepared to continue making significant long-term local contributions to school capital funding moving forward and they are asking the state to provide much needed assistance.

"In Montgomery County, our school system has grown by about 2,000 students a year over the past several years," Leggett said. "Our County's unprecedented increase in enrollment is the highest in the State. Over the next 12 years, projected enrollment will grow by 25,000 students.

“We three County Executives have a very simple message: Our kids and families can't afford for any of us to play 'catch up.' The State has an interest in helping us to educate the next wave of teachers and scientists and researchers and entrepreneurs who will lift up our counties and this state long after all of us are gone.” 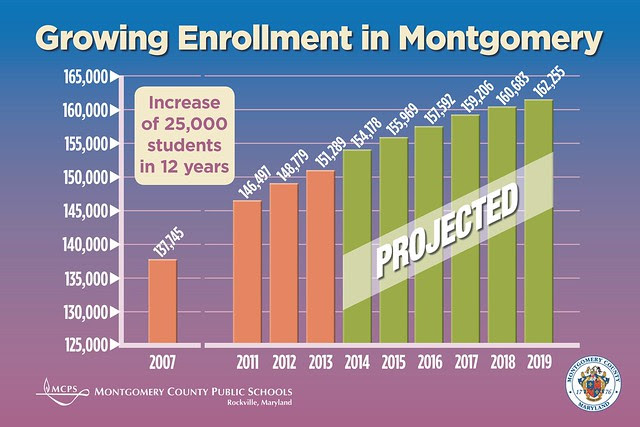