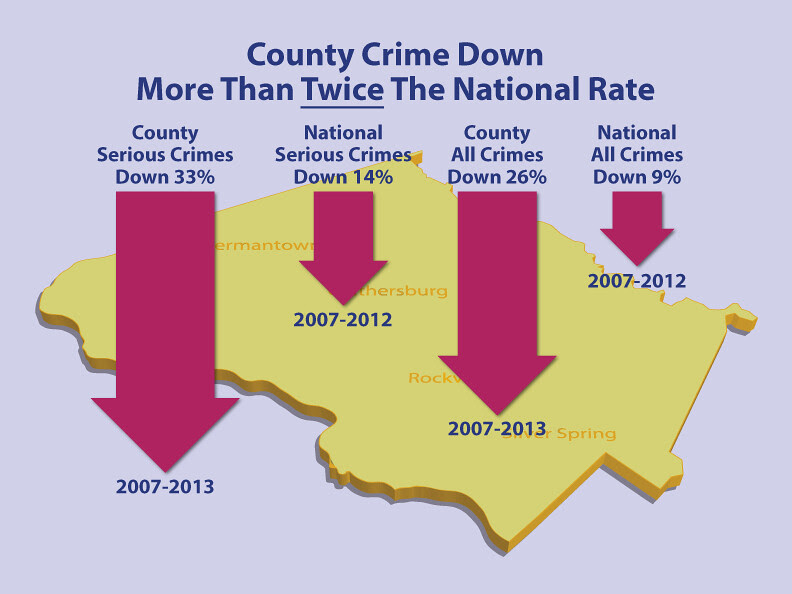 Montgomery County Executive Ike Leggett and Police Chief J. Thomas Manger, along with State’s Attorney John McCarthy and County Council President Craig Rice, recently announced that total crime for 2013 in Montgomery County decreased nine percent from 2012 – part of a seven-year trend that totaled a 33 percent reduction in serious crime and a 26 percent decrease in all crimes.

The 33 percent drop was more than twice the decrease in crime nationally over the same time period -- and eight times lower than the rate of decrease for the previous seven years in the County (2000-06).

Budget funding over the past seven years has financed portions of the Chief’s Three-Year Staffing plan – to include staffing of Public Community Action Teams (PCAT) and District Community Action Teams (DCAT), more police District investigative positions to include the establishment of a separate 6th District Police Investigative Unit, and a Centralized Criminal Street Gang Unit.

Despite the trying economic times, the County was able to increase the full-time positions in the department – sworn and civilian – by more than 100.

Watch videos of County Executive Leggett and Chief Manger.
at 10:12 AM