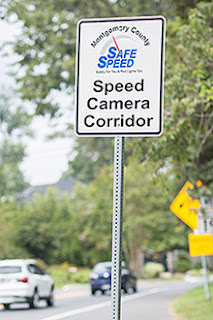 A study released on September 1, 2015 by the Insurance Institute for Highway Safety (IIHS) shows that “Montgomery County’s speed-camera program has led to long-term changes in driver behavior and substantial reductions in deaths and injuries. The IIHS is an independent, nonprofit scientific and educational organization dedicated to reducing the losses, deaths, injuries and property damages from crashes on the nation's roads. The study compared speeding in Montgomery County, which began utilizing a Safe Speed automated enforcement program in 2007, to the same time period and similar roads in Fairfax and Arlington counties which do not have speed camera programs.

Comparison safety gains in Montgomery County attributed to the speed-camera program include:

Read more about the study in the Washington Post; or view the full report.
at 11:28 AM