Recently the Montgomery County Police Department’s Autism, Intellectual, Developmental Disabilities, and Alzheimer’s (AIDDA) Outreach Program was recognized for its outstanding contributions to community policing. The Department’s Vice and Intelligence Unit was also honored for its investigative work into human trafficking at the same state recognition ceremony. 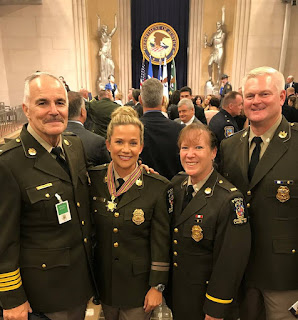 Officer Laurie Reyes, who leads and originated the AIDDA program, accepted the awards on behalf of all the officers in the department who take special training to better understand the needs of and better serve individuals with these challenges.

Officer Reyes was one of 25 law enforcement officers and deputies from 12 jurisdictions across the country to be recognized by Attorney General Jeff Sessions and Justice Department leadership as recipients of the Second Annual Attorney General’s Award for Distinguished Service in Policing.

The Montgomery County Police Special Investigations Division’s Vice and Intelligence Unit with assistance from the Rockville City Police Department’s Street Crimes Unit, received a Governor’s Citation from Maryland Governor Larry Hogan for their seven-month investigation into specifically-reported massage spas acting as “houses of prostitution.” The originally targeted spas were in Rockville, but related spas were found in Derwood and Gaithersburg. Through the investigation, it was learned that approximately 30 Asian female workers were rotated through the spas and that they were brought into the Rockville area from Flushing, New York, a nationally-known Asian human trafficking hub. All the investigated spas have now been permanently closed for business.

Officer Reyes also received a Governor’s Citation for creating the program, training police officers and community members on how best to support those with Autism, Intellectual, Developmental Disabilities and Alzheimer’s, especially when they go missing. She was honored for her positive contributions on behalf of the safety of our Maryland citizens.

If your family could benefit from support from the AIDDA Unit, or if you know someone who could learn more about the program at www.montgomerycountymd.gov/lifesaver.
at 4:22 PM