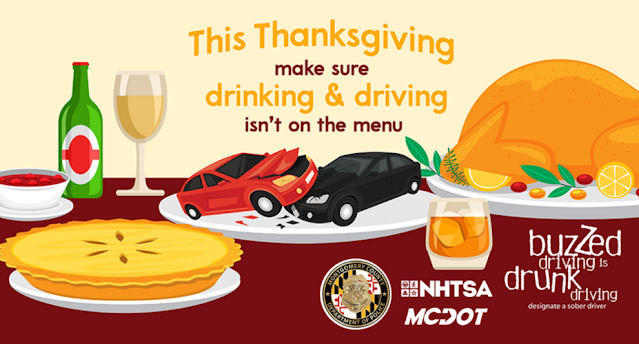 The extended Thanksgiving holiday is one of the most heavily traveled times of the year. Additionally, the evening before Thanksgiving has historically been one of the busiest nights for bars and restaurants, with high drinking rates. The Montgomery County Department of Transportation (MCDOT) and the Montgomery County Police Department (MCPD) are reminding residents that high-risk activities, combined with the sheer number of drivers on the road, make it an especially dangerous time for alcohol-related collisions.

“Unfortunately, drunk driving is a real threat to our community, and that threat increases during holidays like Thanksgiving,” said County Executive Marc Elrich. “The Wednesday before Thanksgiving—Thanksgiving Eve—is an especially high-risk night for impaired driving. If you choose to drink, plan out a safe ride home beforehand. Nationally, nearly 12,000 people lost their lives to drunk driving last year. That is one person killed in a drunk-driving crash every 45 minutes. In Montgomery County alone, our police force arrested 284 impaired drivers during the 2021 Holiday Task Force.”

The night before Thanksgiving is especially dangerous. Called “Blackout Wednesday,” “Drinksgiving” and “Whiskey Wednesday” by public safety agencies, the nicknames have come to describe a cultural phenomenon in which heavy drinking takes place, and as a result, drunk driving-related crashes increase.

“Although gas prices are higher than they were a year ago, they have fallen since the summer peak,” said MCDOT Director Chris Conklin. “That, coupled with pandemic fears waning, will have friends and families especially excited to gather around the Thanksgiving table this year. I wouldn’t be surprised if we see a record number of travelers taking to the road next week. That high number coupled with the fact that about 30 percent of all our roadway fatalities involve drunk drivers is staggering and the problem seems to be getting worse. Nationally, 2020 saw a 14 percent increase in drunk driving deaths compared to the year before. Impaired driving puts all roadway users at risk—and is completely preventable.”

Each year, more than 20,000 people are arrested for driving under the influence (DUI) offenses in Maryland. Penalties for a first-time DUI conviction in Maryland could include jail time, significant fines, mandatory ignition interlock and license suspension.

“We will be kicking off the Montgomery County Police Alcohol Holiday Task Force before the Thanksgiving holiday and our officers will be devoting their full time and attention to detecting alcohol-related offenses this holiday season,” said Montgomery County Police Chief Marcus Jones. “We will be conducting sobriety checkpoints and saturation patrols to identify and arrest drunk drivers. Anyone who chooses to drink alcohol should arrange for a designated driver who is not drinking at all or plan to take a taxi or public transportation. With so many safe ride options available, there is no excuse for driving after drinking. It is a selfish decision that puts everyone on our roads at risk of death or injury.”

The County’s Vision Zero effort to prevent death and injury on Montgomery County roadways offers a listing of local safe rides on its website here.

The County is asking parents to emphasize to drivers in their families under age 21 that underage drinking can lead to serious consequences. Information about how to help prevent underage drinking, through communication and creating an action plan, is available from the Federal Interagency Coordinating Committee on the Prevention of Underage Drinking website.
at 5:27 AM