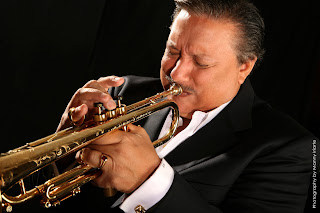 Grammy award-winning musician Arturo Sandoval will headline the Silver Spring Jazz Festival, which will take place on Saturday, Aug. 24, from 3 to 10 p.m. in Veterans Plaza located at One Veterans Place.

New this year, the Jazz Festival is scheduled the weekend before the Labor Day holiday to make it the County’s end-of-the-summer celebration.

Arturo Sandoval, a protégé of the legendary jazz master Dizzy Gillespie, was born in Artemisa, a small town in the outskirts of Havana, Cuba, in 1949. Just two years earlier Gillespie became the first musician to bring Latin influences into American jazz. Sandoval began studying classical trumpet at the age of 12 and has evolved into one of the world’s most acknowledged guardians of jazz trumpet and flugel horn, as well as a renowned classical artist, pianist and composer.

Sandoval has won four Grammy Awards, six Billboard Awards and an Emmy Award for his composing work on the entire underscore of the HBO movie based on his life, “For Love or Country,” which starred Andy Garcia. He recently performed on the Grammy Awards broadcast with pop-phenomenon Justin Timberlake, as well as on the Latin Billboard Awards with the gifted Alicia Keys. At those ceremonies, he was awarded his sixth Billboard Award for “Best Latin Jazz Album.”

Silver Spring has earned a reputation of being one of the most diverse and dynamic communities in the country, where there is always something to do and enjoy. Activities and events embrace the Arts & Entertainment District’s culture of being a welcoming community that values vibrant arts and diverse experiences.
at 3:15 PM