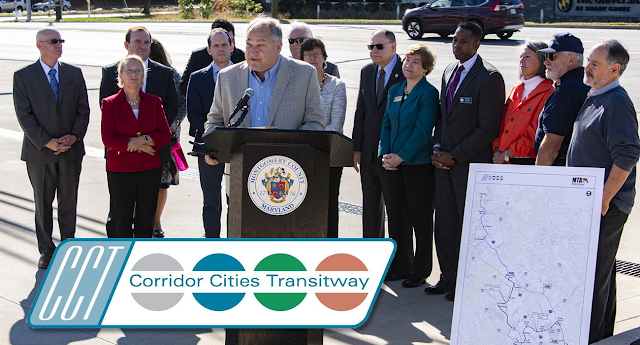 Montgomery County Executive Marc Elrich on Oct. 28 led a group of County Councilmembers, Federal, State and municipal officials, as well as Montgomery business leaders, to express their disappointment and concern with the Maryland Department of Transportation’s decision to eliminate the Corridor Cities Transitway (CCT) from the draft of the State 2020-25 Consolidated Transportation Program.

By deleting the public transportation project from its long-term plan, the State removes itself from the planning and funding of the project that would provide needed public transportation to support the Great Seneca Science Corridor in the Great Seneca Highway/Darnestown Road area. The CCT also would support the Universities of Shady Grove and would help the Montgomery’s UpCounty area that is overwhelmed with I-270 traffic.

County Executive Elrich and the other officials who spoke emphasized that the CCT was conceived to be an integral part of the growth and development of the area. It would provide transit to make the planned bio-tech area more accessible and encourage people and businesses to locate there.

Learn more about the effort to restore the CCT to the State’s long-term transportation plan.
at 11:07 AM