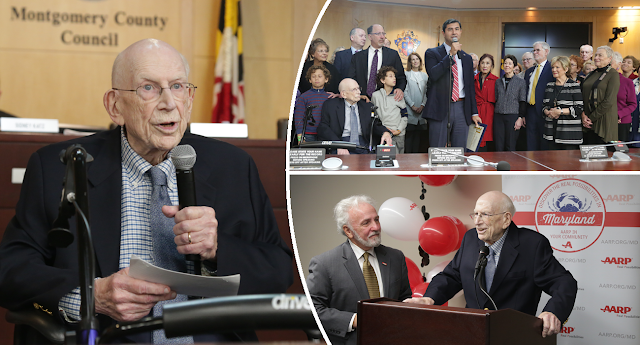 AARP Maryland’s award is named for the esteemed statesman J. Joseph Curran Jr., former state representative, lieutenant governor and longtime attorney general. It recognizes exceptional individuals who have exhibited a lifetime of exemplary commitment to volunteerism and civic involvement. Austin Heyman is only the second person to receive this honor from AARP Maryland.

“Montgomery County owes a debt of gratitude for all he has done,” said County Executive Elrich. “He has been a volunteer in our County since the 1970s and has worked with people of all ages to better their lives through advocacy. He and his wife Barbara devoted themselves to every aspect of community involvement from children and educational issues, to intergenerational and cultural understanding, to advocacy for older adults and the disabled. Austin is a community icon, a visionary and an inspiration to residents of all ages in Montgomery County.”

County Council President Nancy Navarro and Councilmember Gabe Albornoz recognized and celebrated Mr. Heyman as a visionary and integral leader of the community who has demonstrated a life of service, creativity, integrity and purpose.
Learn more about Mr. Heyman’s accomplishments and the honors he recently received.
at 11:07 AM