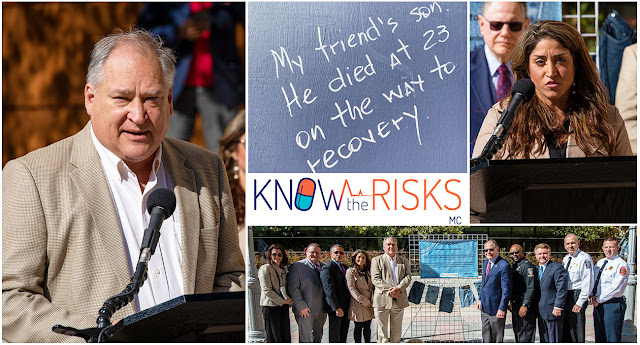 County Executive Marc Elrich and the County’s Opioid Intervention Team (OIT) recently updated the progress the County has made in addressing the opioid crisis in Montgomery County. A key component of the local effort has been focused on making Naloxone, which can help those who have overdosed, readily available in the community.

Latest data shows that there have been 49 overdose deaths to-date this year and 320 non-fatal overdoses since January. In September, there were seven overdose deaths and 38 lives saved through the use of Naloxone.

Members of the OIT who joined for the update included co-chairs Raymond Crowel, who is the director of the Department of Health and Human Services, and Earl Stoddard, who is director of the Office of Emergency Management and Homeland Security Director. Also supporting the effort were Fire Chief Scott Goldstein, Acting Police Chief Marcus Jones, State’s Attorney John J. McCarthy and County Sheriff Darren Popkin.

“Montgomery County, along with every county in Maryland, has too many overdose deaths and individuals who are addicted,” said Elrich. “We need to tackle the problem from many angles and the OIT has directed resources towards prevention, education, and treatment. No family should experience the overdose death of a loved one.”

More information at the programs the County offers in the battle against opioid abuse is available on press release or montgomerycountymd.gov/opioids.
at 10:58 AM