County Launches ‘Be Safe, Be Seen’ Campaign to Increase Safety During Decreased Daylight 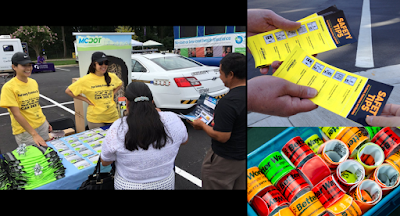 Montgomery County Government departments and agencies are combining their resources in November to launch one of the most aggressive campaigns in County history to make drivers, pedestrians and bicyclists aware of the added perils that come with time changes, and decreased hours of afternoon daylight occurring with the switch to Standard Time. The approximately 20 planned “Be Safe, Be Seen” events will form the most comprehensive one-month safety campaign that the County has ever undertaken.

A 2016 study by the National Highway Traffic Safety Administration showed that 26 percent of all pedestrian deaths occurred between 6 p.m. and 8:59 p.m. Because peak evening commuting times in fall and winter occur during periods of increased darkness, danger is increased. The adjustment to Standard Time began the shift for this season.

This new campaign is evidence of the value of collaboration facilitated by the County’s Vision Zero Initiative, which is committed to reducing and eventually eliminating all traffic-related deaths. The concept was initiated by the County’s Police Department during targeted Vision Zero collaboration and subsequently brought in cooperative action by the County’s Department of Transportation. The Be Safe, Be Seen campaign also will involve the combined efforts of the Fire and Rescue Service, Montgomery County Public Schools (MCPS), the CountyStat program and the Office of Public Information.

Learn more about the campaign and the scheduled events to promote safety.
at 10:53 AM