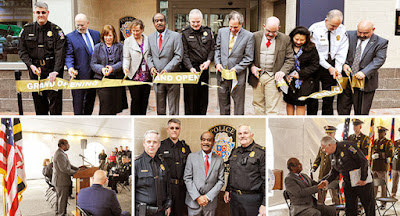 County Executive Ike Leggett joined by other officials, police and community members cut the ribbon for the new 2nd District Police Station on Monday, January 22. The new station is located at 4823 Rugby Avenue in Bethesda.

The new station resulted from a public-private partnership with developer StonebridgeCarras. The new four-story, 28,000-square-foot, state-of-the-art facility provides the 2nd District with many features that the old station at 7359 Wisconsin Avenue, built in 1961, could not. In exchange, StonebridgeCarras will develop the Wisconsin Avenue property as part of an office and hotel project.

The new station opens to the public in mid-February. Learn more at: New 2D Station.
at 12:05 PM