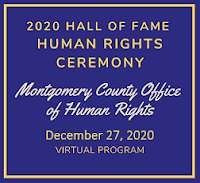 Six individuals selected by Montgomery County Executive Marc Elrich were inducted into the 2020 class of the County Human Rights Hall of Fame. The 11th biennial event, which was held virtually on Dec. 27, honored individuals who have made great personal sacrifices in contributing to human and civil rights in Montgomery County, either as trailblazers of the past or as current light bearers in the struggle.

The following were inducted at this year’s ceremony:
More comprehensive biographies are available on the Office of Human Rights website following the event.

More information on the Office of Human Rights is available on its website.
at 7:04 PM