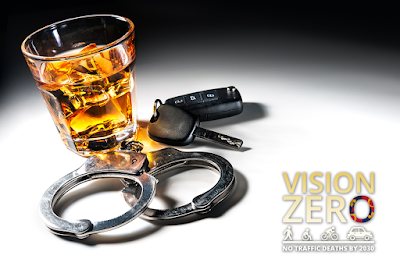 An eight-week special task force formed to prevent serious and fatal traffic collisions in Montgomery County during the holiday season resulted in 262 arrests for driving under the influence of alcohol and drugs. During the period of the task force, which began Nov. 18 and was composed of specially assigned Montgomery County Police, along with respective City and State police agency partners, there were no DUI-related fatal collisions in the County.

The task force, which continued through Jan. 9, was part of Montgomery County’s Vision Zero Initiative that seeks to reduce serious and fatal traffic collisions.

During much of the period of the task force, County restaurants and bars had limitations in indoor operations and in operating hours due to the COVID-19 health crisis. However, the number of drivers operating vehicles while impaired remained significant.

“Since the pandemic began, we have seen a ‘triple threat’ of excessive speeds, impaired driving and not wearing a seatbelt that have resulted in people losing their lives on our roads,” said Captain David McBain of the traffic division of County Police. “The task force sought to limit the danger on our roads for innocent drivers, passengers and pedestrians. We want everyone to get home safe and these mobilizations are a reminder about the responsibilities we all have to keep our roads safe.”

County Police had seven full-time Alcohol Initiatives Unit officers and 20 additional officers assigned to the task force. Other departments and agencies had various numbers of officers participating in the enforcement efforts. Among the actions of the task force partners was to stop suspected drunk drivers and to work with the County’s Department of Alcohol and Beverage Services inspectors on retail compliance with ID and legal age laws.

Over the past three years, the Holiday Task Force has removed more than 850 impaired drivers from local roads. The task force’s work was dedicated to County Police Officer Noah Leotta, who was killed by a drunk driver while on duty as part of the 2015 task force.

More about the County’s Vision Zero Initiative can be found at montgomerycountymd.gov/visionzero.
at 7:39 PM