Preregistration Survey Now in Place for Monkeypox Vaccines, but in Limited Supply 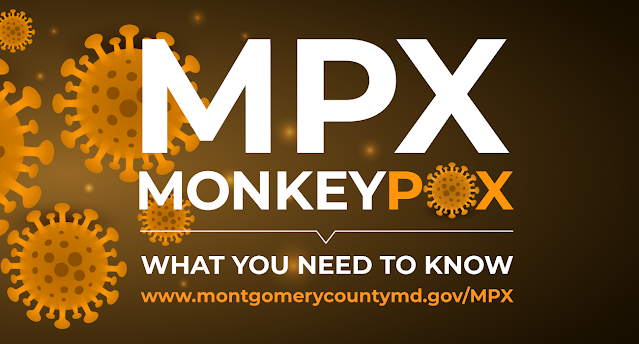 Monkeypox continues to be an infection of growing concern in Montgomery County and around the nation. Montgomery County has a limited supply of monkeypox vaccine and has established a preregistration survey to identify residents who are interested in receiving a vaccination and are at risk for having been exposed to Monkeypox in the previous four to 14 days.

The pre-registration survey is now online.

Appointments to receive vaccines at Montgomery County-operated clinics are based on eligibility and vaccine supply is not guaranteed.

Monkeypox is a rare disease caused by infection with the monkeypox virus. Monkeypox can infect animals, such as monkeys and rodents, as well as humans. The monkeypox virus belongs to the same group of viruses that cause smallpox and is not related to chicken pox.

Monkeypox symptoms usually start within three weeks of exposure to the virus. If someone has flu-like symptoms, they will usually develop a rash one to four days later.

Monkeypox can be spread from the time symptoms start until the rash has healed, all scabs have fallen off and a fresh layer of skin has formed. The illness typically lasts two to four weeks.

Information about symptoms of Monkeypox and how to prevent are on the County website at Monkeypox (montgomerycountymd.gov/MPX).

The Centers for Disease Control and Prevention (CDC) advises that symptoms of monkeypox can include:
The CDC further advises that a person infected with Monkeypox may experience all or only a few symptoms:
The first of a series of virtual townhalls about Monkeypox will be held on Monday, Aug. 22. More details will be available soon. The first town hall is intended for the LGBTQ community and is being held in partnership with County Council Vice President Evan Glass.