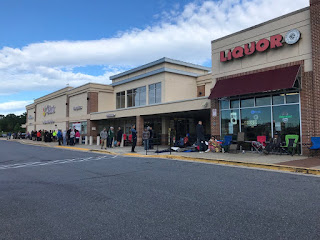 The Montgomery County Department of Liquor Control (DLC) set a one-day store record of more than $116,000 in sales during the Whiskey Rocks celebration on June 14, which was held at the Burtonsville retail store located at 15620 Old Columbia Pike.

The whiskey celebration attracted hundreds of customers to taste and purchase hard to find whiskey products. Dozens of customers lined up the day before the event to be at the front of the line when the retail store opened.

In addition, the Whiskey Rocks celebration featured tastings, raffles, a free lunch sponsored by Buffalo Trace, free seminars and special barrel releases that kept consumers engaged throughout much of the day. The night before the event, Dogfish Head Alehouse hosted a whiskey dinner at its Gaithersburg location, which was billed as part of the DLC’s Whiskey Rocks event.

All profits earned by the DLC are transferred to the Montgomery County General Fund supporting police and fire, transportation projects and other public services that tax dollars would otherwise fund.

The next Whiskey Rocks events is planned for January of 2020. To receive updates about upcoming DLC events, product lotteries and sales, visit the DLC’s website.
at 2:09 PM