Intersection of Executive Boulevard and Old Georgetown Road in White Flint Will Be Closed to Traffic for Five Months Starting Monday, March 22, for Construction Project

The intersection of Executive Boulevard and Old Georgetown Road in the White Flint area will be completely closed to vehicle traffic starting on Monday, March 22, for issues related to a construction project. It is expected that the intersection will be closed through late August.

Prior to the closing, the Montgomery County Department of Transportation worked to open a new section of Grand Park Avenue between Old Georgetown Road and Banneker Avenue. In addition, improvements have been made along Executive Boulevard between Nicholson Lane and Banneker Avenue.

The opening of Grand Park Avenue and the improvements to Executive Boulevard will lessen the impact to traffic getting to the Bethesda North Marriott/Montgomery County Conference Center on Marinelli Road and to nearby Pike & Rose residences and businesses.

Work hours on the project will be from 6 a.m. to 10 p.m. Monday through Friday. No overnight shifts are planned at this time. 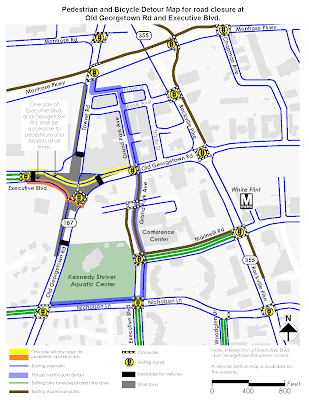 The temporary traffic flow and detour plan around the intersection, which has been developed by MCDOT and the Maryland Department of Transportation/State Highway Administration, will include the following:
Updates on the project can be found on the project website at https://www.montgomerycountymd.gov/whiteflint/index.html.

A map of detours for pedestrians and bicyclists that can be used during construction can be found at https://tinyurl.com/3wufdpx8.
A map of detours for drivers can be viewed here.
Questions or concerns during the intersection closure can be directed to Paul Bender, senior resident engineer, at: 301-343-1527 or via email at paul.bender@montgomerycountymd.gov.
at 8:18 PM