County’s Office of Consumer Protection to Celebrate 50 Years of Accomplishments by Inviting Public to Join Ceremonies on Monday, Dec. 6 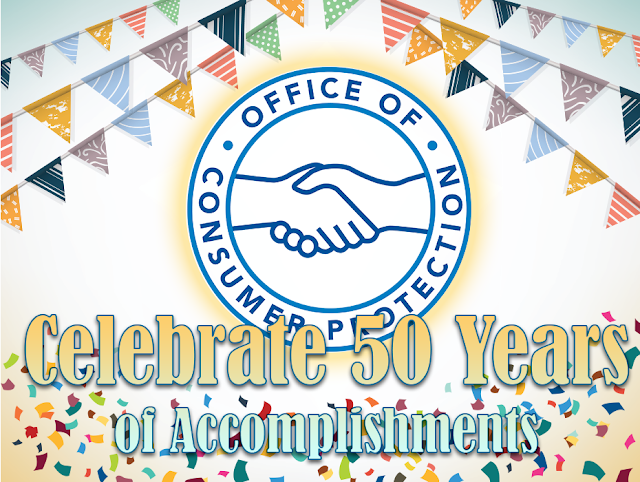 Montgomery County’s Office of Consumer Protection, which has been recognized as one of the nation’s foremost and oldest government consumer protection agencies, is inviting the public to join its 50th anniversary celebration at 1:30 p.m. on Monday, Dec. 6, in the Council Office Building’s first floor auditorium in Rockville. The event will celebrate the office’s five decades of accomplishments.

The Council Office Building is located at 100 Maryland Ave. in Downtown Rockville.

On Tuesday, Dec. 7, a proclamation issued by Council President Marc Elrich and the County Council will be presented at the Council’s virtual weekly meeting. The meeting, which will be televised on the County cable station County Cable Montgomery (CCM), is scheduled to begin at 9:30 a.m.

The office was established in one of the first actions taken when Montgomery County in 1971 became a County Council / County Executive form of government. Starting with limited funds and a staff of two, in her 25 years of leadership, Director Barbara B. Gregg guided Maryland’s first local government consumer protection agency to become a nationally recognized office. The County Council’s goal in forming the office was “to strike a blow on behalf of each and every citizen of Montgomery County,” and over the years, the office has done more than that.

Among the actions the Office of Consumer Protection (OCP) has taken that have gained national attention were its efforts to control predatory towing that existed at near crisis levels in Montgomery County and in other communities nationwide. The office has enforced laws that prohibit unfair and deceptive trade practices and has worked to maintain a fair marketplace for consumers and merchants. The office enacted, administered and enforced one of the first local laws in the country requiring that each newly constructed home be covered by a warranty program, has successfully resolved thousands of individual complaints and returned millions of dollars to consumers. It initiated successful lawsuits or legal actions on behalf of consumers against an auto dealership, a plumbing firm and new home builders.

The enforcement actions taken by OCP have resulted in millions of dollars being obtained for consumers and served as a clear message and deterrent to any unscrupulous merchants.

The efforts of the office have led it to be recognized or cited as the main experts on consumer experts by national media including The New York Times, The Washington Post, The Wall Street Journal, US News & World Report, Kiplingers, Money Magazine and Business Week. Representatives of OCP have appeared on network television programs including Today Show, DateLine, 20/20, Prime Time Live, Good Morning America and 48 Hours.

“As much as we hope that all businesses, service contractors and charity organizations operate in the best interests of residents and the County, unfortunately, the reality is that some do just the opposite,” said Eric Friedman, who has been the OCP director since 2007 “In so many areas of the country, there have been few consumer protection agencies that actively seek to resolve issues and make sure they do not happen again. Each case in which we are successful serves as a deterrent to other businesses to upgrade their practices. We have a long record of helping residents and we will be there for the next challenges.”

Over the years, County Executives and the County Council have respected the office enough to increase its responsibilities. The operation has grown to oversee the licensing or registering of businesses including auto repair shops, towing companies, new home builders, appliance repair shops and secondhand personal property dealers in Montgomery County.

OCP also established a history of engaging in extensive collaborative efforts with other Montgomery County agencies to provide “silo free” services to educate and protect consumers. It collaborated with the Fire and Rescue Service to inspect retail stores and remove dangerous electrical devices that were being sold without the required safety certification labels. The office continues to collaborate with the Police Department regarding seven types of dispatches that police officers may receive related to consumer protection issues. The office created an online training module for police officers and applicants in the Police Training Academy. OCP collaborated with the Sheriff’s Office to establish an award-winning program to safeguard and return personal property and documents to consumers that would otherwise have been lost during an eviction at a place of business.

Believing that informing consumers in advance of potential scams and deceptive practices, OCP launched one of Montgomery County’s first cable TV shows to educate consumers and merchants. Consumer Digest was produced featuring guest speakers, helpful demonstrations and a quiz format. That show evolved into the more recent Consumer Compass and many two-minute alerts. All are available on OCP’s YouTube channel ConsumerWise.

More information about Montgomery County’s Office of Consumer Protection is available on its website at https://www.montgomerycountymd.gov/ocp/.