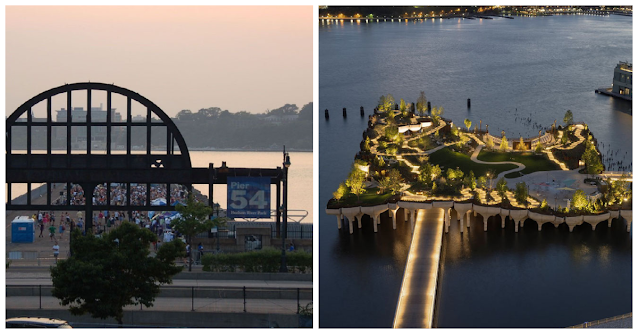 Montgomery Parks will host a free, online, speaker series on Little Island, a unique new public park in New York City built on the Hudson River. The session takes place on at 1 p.m. on Tuesday, Dec. 7, and will feature Michael Wiggins, the director of education and community relations for Little Island.
The session will describe how the new park serves as a hub for arts, culture and nature. The design resulted in a first of its kind park built on a body of water.

Rising from the remnants of Pier 54, Little Island sits on a site that has played a pivotal role in the story of the Hudson River and its surrounding communities.

The 19th and 20th centuries saw the Hudson River waterfront transform into a busy port of entry. Between 1910 and 1935, Pier 54 operated the British Cunard-White Star line, serving as a point of departure and return for trans-Atlantic ocean liner voyages. In 1912, survivors from the famed Titanic disaster arrived to safety at Pier 54 while aboard the RMS Carpathia rescue liner.

In 1915, the RMS Lusitania departed from Pier 54, only to be sunk by German U-boats off the coast of Ireland five days later as a casualty of World War I.

In 2013, Barry Diller of the Diller-von Furstenberg Family Foundation, in partnership with Hudson River Park Trust leadership, embarked on the unique opportunity to envision a solution for the repair and reactivation of Pier 54, recently damaged by Hurricane Sandy. Diller chose to reimagine an entirely new type of public space for New York, one that would create an immersive experience with nature and art.

To register for the Montgomery Parks session, click here.
at 7:00 PM