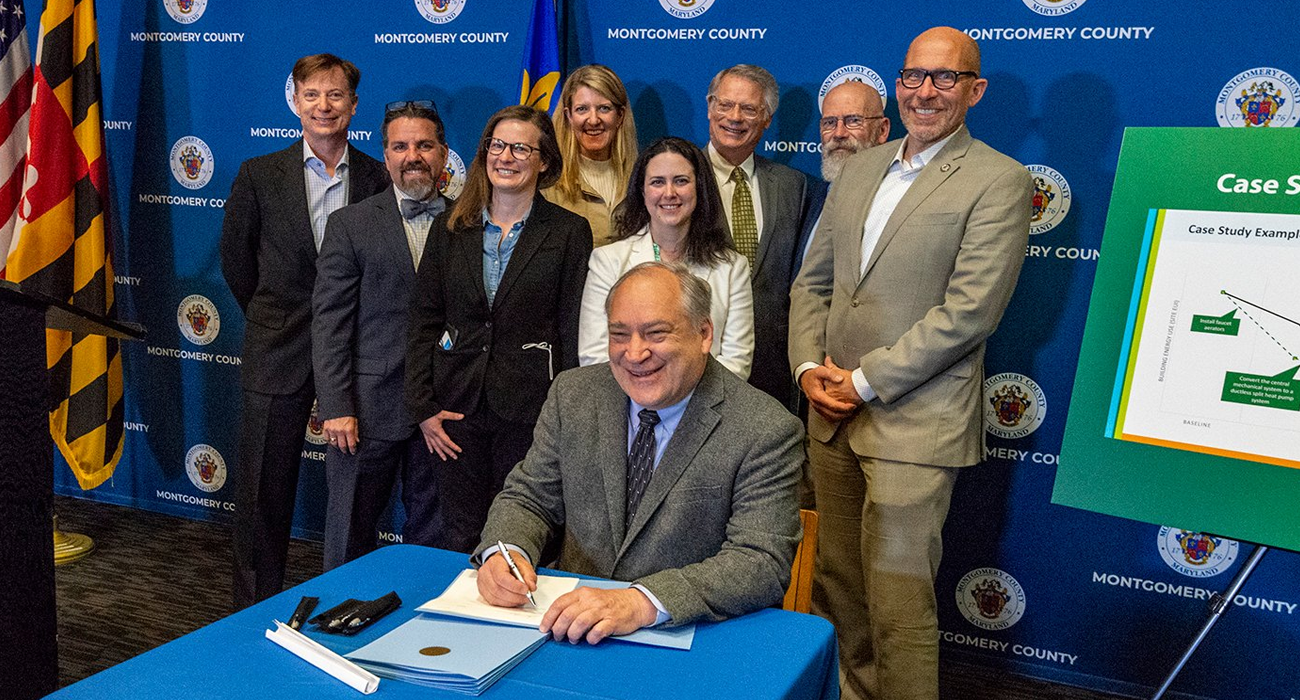 Montgomery County Executive Marc Elrich this week signed the “Building Energy Performance Standards” (BEPS) legislation (Bill 16-21) into law. The bill, which was passed unanimously by the County Council on April 19, will expand the County’s benchmarking requirements by setting minimum energy performance standards for existing buildings. This will be one of the most effective ways to reduce energy demand and carbon pollution from the built environment as the County tackles its ambitious climate change goals.

The new law expands the number of buildings covered by the County’s existing Benchmarking Law to include additional County-owned, commercial and multifamily buildings and establish long-term standards for those buildings and require the use of less energy.

At the bill signing, County Executive Elrich stressed the importance of the legislation in realizing the County’s Climate Action Plan goals of eliminating greenhouse gas emissions by 2035. A video of the bill signing ceremony can be viewed at https://youtu.be/eQE5Uezy7MQ.
County Executive Elrich was joined at the ceremonies by County Councilmember Tom Hucker, chair of the Council’s Transportation and Environment Committee; Tom Deyo, chief executive officer of the Montgomery County Green Bank; Julie Wolfington, energy and sustainability lead at BOLAND; Adam Roberts of Bethesda Green; and representatives from the climate advocacy community.

“This new law will lead to energy improvements for multifamily residential and commercial buildings that will save money and create new local jobs,” said County Executive Elrich. “My administration is proud to have collaborated with the commercial and multifamily building sector in developing this legislation. Climate change is something we must address with a sense of urgency, and with this new law, our County is taking a big, bold step forward.”

Energy use in the building sector is the largest contributor to greenhouse gas emissions in Montgomery County, representing almost 50 percent of total community-wide emissions. BEPS is a powerful policy tool that helps to drive energy improvements and emission reductions in existing buildings.

Montgomery County is among the first local jurisdictions in this nation to embark on this type of ambitious, game-changing legislation and has gained the attention of President Biden’s Council on Environmental Quality and environmental activists across the country. Other jurisdictions, like Denver, Colorado, specifically credited this proposal as their model.

In 2014, Montgomery established the first County-level benchmarking law for County-owned and commercial buildings that were 50,000 square feet and above to annually track and report building and energy performance to the County’s Department of Environmental Protection.

County Executive Elrich unveiled his Climate Action Plan in June of 2021. The plan guides the County toward its goals of reducing greenhouse gas (GHG) emissions by 80 percent by 2027 and by 100 percent by 2035 compared to 2005 levels. The Montgomery climate plan, which will increase resilience in the face of climate hazards, is one of the most ambitious climate plans in the nation for a local government. The details of the plan can be found at www.MontgomeryCountyMD.gov/climate.

For more information on BEPS, visit https://www.montgomerycountymd.gov/green/energy/beps.html.
at 12:09 PM