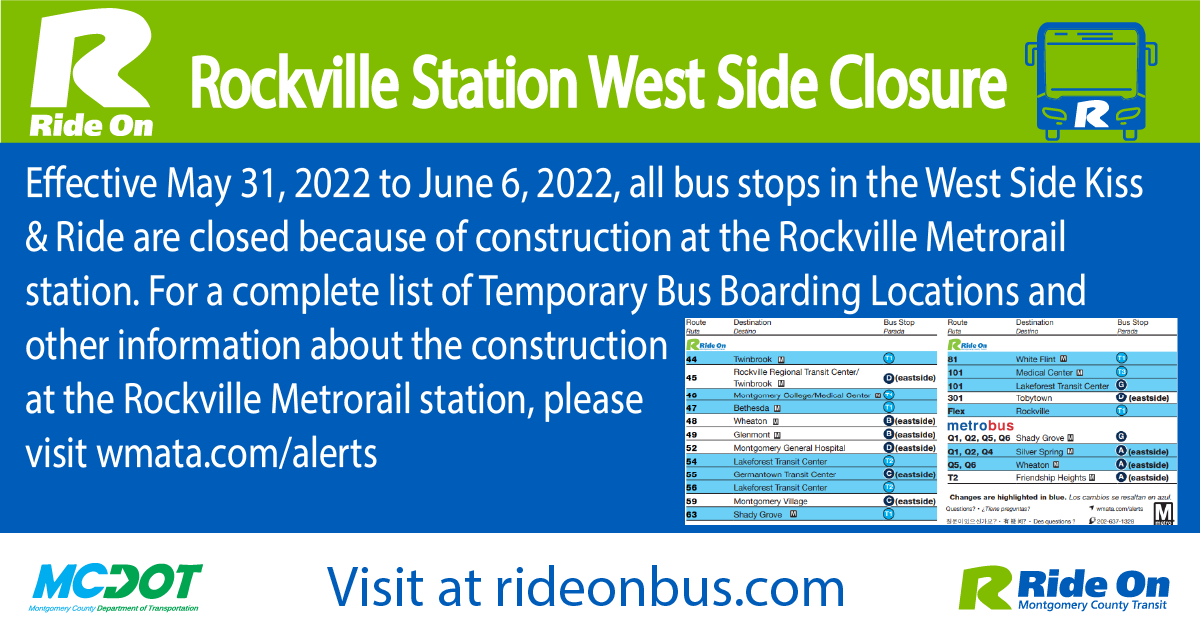 Construction and paving work at the Rockville Metrorail Station will lead to Ride On and Metrobus bus stops on the West Side Kiss & Ride being closed and temporarily relocated from Sunday, May 31, through Monday, June 6.

All bus stops normally on the west side will be temporarily relocated to either the east side, on the street at MD 355, or one block over on Monroe Street in front of the Montgomery County Executive Office Building. Wayfinding signs will be placed at the Metro station to help riders locate their bus stops. Additionally, Ride On staff will be onsite at the station, for rider assistance.

Ride On routes that will be temporarily relocated at the Rockville Metro Station:
Metrobus routes that will be temporarily relocated are:
Bus interiors will continue to be cleaned by the County’s Department of General Services with hospital-grade disinfectant. Bus filter and ventilation systems also are treated with a disinfectant.

Passengers are encouraged to wear face coverings when traveling by public transportation. MCDOT buses have a supply of face coverings for those who cannot provide their own.

Ride On bus service will remain free until July 2.

For the most up-to-date service information, riders should follow @RideOnMCT on Twitter, Facebook, YouTube, and Instagram. In addition, information is available at RideOnBus.com, by subscribing to receive email alerts at www.montgomerycountymd.gov/govdelivery, or texting MONTGOMERY RIDEON to 468311 to receive text alerts.
at 9:50 AM