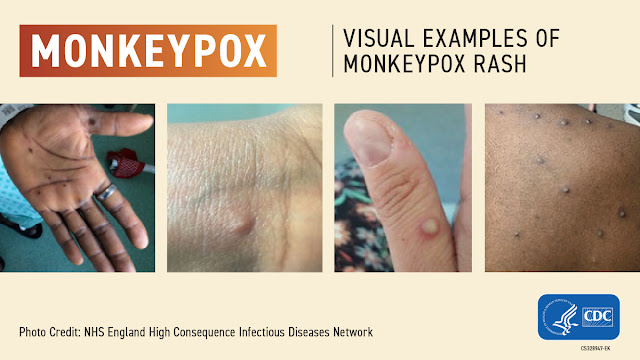 The Montgomery County Department of Health and Human Services is offering monkeypox vaccines, but it has a limited number of vaccine doses. Under the guidance of the Maryland Department of Health, Montgomery County is offering vaccinations to eligible residents who are at highest risk of contracting the virus.
Residents who are identified by public health officials as close contacts of current monkeypox cases will be offered vaccination. Public health staff from the County’s sexual health programs will be working with community-based non-profit organizations to identify residents who could be at risk and are contacting them directly to offer an opportunity to be vaccinated. As vaccine supply increases, additional residents who are at-risk will be identified and offered vaccination.

Currently, monkeypox vaccinations are being limited to:
The risk of monkeypox in the United States is believed to be low. Monkeypox does not spread easily between people, and the time between exposure and when symptoms start give public health officials time to track down contacts and break the chain of infection.

Anyone, regardless of gender identity or sexual orientation, can catch monkeypox. However, a number of cases in the current outbreak are among gay, bisexual or other men who have sex with men.

People who do not have monkeypox symptoms cannot spread the virus to others. Even though it is not considered a sexually transmitted infection, monkeypox can spread during intimate physical contact between people. Anyone can get monkeypox if they have close contact with someone who has the virus.

Monkeypox is a rare disease caused by infection with the monkeypox virus. Person to person transmission occurs through:
Monkeypox can be spread from the time symptoms start until the rash has fully healed and a fresh layer of skin has formed. The illness typically lasts two-to-four weeks. People who do not have monkeypox symptoms cannot spread the virus to others.

Symptoms can often include flu-like symptoms such as fever, headache, muscle aches and swollen lymph nodes, followed by a rash and lesions on the skin. Most cases of monkeypox do not require hospitalization, but monkeypox is highly contagious in individuals with symptoms.

People who believe they have been exposed to monkeypox should avoid close contact with others until a health care provider examines them and provides testing for the monkeypox virus. They should avoid close contact with pets or other animals until they are examined and tested. If a person tests positive, the Centers for Disease Control and Prevention (CDC) recommends that they stay isolated until the rash has healed, all scabs have fallen off and a fresh layer of intact skin has formed.

Visit the County’s Department of Health and Human Services website for additional information about monkeypox.
at 9:16 PM