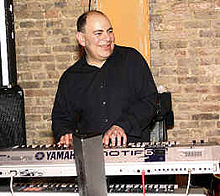 Thursday nights are alive with music this summer in Downtown Silver Spring as the free “Silver Spring Thursday Night Concerts” series continues on Veterans Plaza. Concert series are scheduled for 7-9 p.m. each Thursday evening through Aug. 11. The next performance, on Aug. 4, will feature the R&B and funk music of pianist Elliot Levine.

Baltimore-based Elliot Levine has toured with Wilson Pickett and Heatwave and has opened for Brian McKnight, Freddie Jackson, McCoy Tyner and Gerald Albright. He has had the No. 1 song on mp3.com, which received more than 1 million downloads. That accomplishment was mentioned in the Wall Street Journal. Elliot has three internationally released CDs that have received extensive airplay and distribution.

He has headlined at Blues Alley and the Kennedy Center. In 2003, he scored the music to an Emmy-nominated documentary, "Teens in Between.” His music also was used on "Inside the NBA" on TBS, as well as an independent college movie, "Friends With Benefits.”

The lineup for the Thursday night concert series:
Performances are canceled due to weather only if it is raining at 7 p.m. For more information about the series, visit silverspringdowntown.com.
at 9:15 PM