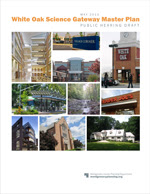 Historically, as commercial development progressed through various sections of Montgomery County, the eastern portion remained primarily residential. As the population continued to rise and development flourished in other parts of the county, elected officials looked toward ways to bring more jobs to the East County.

While the County had previously concentrated efforts on acquiring Site 2, agreement was never reached regarding purchase of the location owned by the Washington Suburban Sanitary Commission (WSSC).

During his first year in office, County Executive Ike Leggett succeeded in purchasing the 155-acre former Site 2 from the WSSC for development as the White Oak Science Gateway to advance life sciences.

The White Oak Science Gateway Master Plan now before the County Council will transform the eastern portion of the County. The plan will focus on leveraging the consolidated headquarters of the U.S. Food and Drug Administration, a new hospital and a 300-acre public-private partnership into a major mixed-use bio-tech hub – the LifeSci Village.

Although the White Oak plan has been called “one of the most ambitious revitalization undertakings in County history,” it is part of a larger move to bring a record number of new jobs to the County in the foreseeable future.

With this goal in mind, Leggett has taken the lead in working with businesses, the community, the Planning Board and the Council to craft the Great Seneca Science Corridor and White Flint master plans, which will grow life sciences, stimulate good jobs and commerce, and foster walkable communities, connected by transit, where residents can live and work.

These projects, together with the Smart Growth Initiative and the White Oak Science Gateway, are projected to create100,000 new jobs in the County in the coming years – the largest single job boost in County history.

The full Council is scheduled for two critical votes on the master plan: a preliminary vote on July 22 and final vote on July 29.

For more information about the White Oak Science Gateway plan, check out the following links:

Read the Planning Board’s revised draft of the plan.

Read the Executive’s letter to Council