County Executive Elrich Unveils Montgomery County Climate Action Plan on Wednesday, June 23, That Is One of the Most Ambitious in the Nation 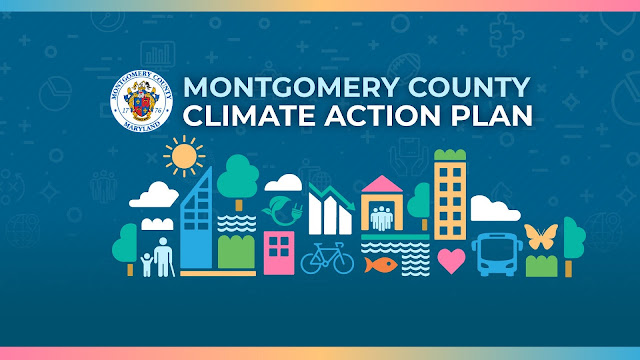 Montgomery County Executive Marc Elrich this week unveiled the Climate Action Plan that will guide the County toward its goals of reducing greenhouse gas (GHG) emissions by 80 percent by 2027 and by 100 percent by 2035 compared to 2005 levels. The Montgomery climate plan, which will increase resilience in the face of climate hazards, is one of the most ambitious climate plans in the nation for a local government.

County Executive Elrich outlined the plan, which includes 86 climate actions, at the Marian Fryer Town Plaza across from the new 14-story Maryland-National Capital Park and Planning Commission headquarters building in Wheaton. The building, located at 2425 Reedie Dr., was built by the Montgomery County Government and has received LEED Platinum certification from the U.S. Green Building Council (USGBC). The LEED Platinum certification is the highest level in sustainable design that USGBC awards in objectively measuring a building’s sustainability. The 308,000-square-foot building is the first County Government facility to receive a LEED Platinum rating.

The actions and technical analyses presented in the plan build upon the work of more than 200 volunteer members of the Climate Technical Workgroups formed by the County Executive, County employees and technical consultants. The plan reflects input from a wide variety of community groups and the general public.

“The urgency of climate change inspires Montgomery County to serve as a model for other jurisdictions,” said County Executive Elrich. “Combatting climate change provides an opportunity to build a healthy, equitable and resilient community. There is no magic wand to accomplish this monumental task. We must take big, bold steps—and many of them. Collectively, communities across the State of Maryland, the country and the world must tackle climate action at the scale that is necessary to curb the cataclysmic social, environmental and economic impacts of climate change.”

The development of the Climate Action Plan was spurred by the County Council’s Emergency Climate Mobilization Resolution in December 2017 that accelerated the County’s communitywide GHG emission reduction goals after they were established in 2007. The resolution recognized the existential threat that climate change poses and called for the County to take a leadership role in strategies to safeguard the planet.

The details of the plan can be found at www.MontgomeryCountyMD.gov/climate.

Throughout the summer and into the early fall, the County’s climate team plans to host community conversations to present the plan to residents, businesses and property owners.

The main elements of the Climate Action Plan include: