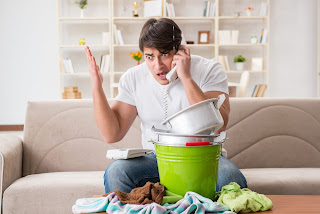 The Montgomery County Office of Consumer Protection (OCP) is warning residents about an increase in unlicensed plumbers and gasfitters marketing their services in the County. OCP has investigated numerous complaints resulting in refunds of monies, issuing of citations and settlement agreements. The risk with unlicensed plumbers and gasfitters is that they can cut necessary corners, not perform the repairs correctly and even create dangerous conditions.

In Montgomery County, plumbers need to be licensed either by the Washington Suburban Sanitary Commission (WSSC license lookup), or by the State’s Department of Labor Licensing and Regulation Board of Plumbing (DLLR license lookup). Most of the County falls under WSSC’s jurisdiction. DLLR has jurisdiction in the cities of Rockville and Poolesville and areas designated W-4/5/6 or S-4/5/6 in the Water and Sewer Plan.

Investigations by OCP has resulted in three citations issued to Gary Russell Jr., owner of G & G Service Group, Inc. (G&G) of Clinton, Md., which was tried by the Office of the County Attorney in District Court. Russell discouraged a consumer from obtaining a permit or inspection, citing higher costs to the consumer. He claimed that he was required to be at the inspection and that this drove up the price. However, the quoted fee for WSSC permits was inflated and his presence at an inspection was not mandatory. While G&G claimed to have a plumbing license, its owner never provided such credentials. Russell did not provide the court with proof of his credentials.

The District Court found Russell of G&G guilty of the three municipal infractions. OCP’s investigation demonstrated that Russell was operating as a plumber without a license, also misrepresenting the costs and attendance requirements of the jurisdictional permit and inspection agency. After an appeal by Russell to Circuit Court, the judgment was upheld. The Circuit Court ordered restitution of $855 to the consumer and issued an Abatement Order stating the plumber and his business had to cease:
“If a second plumbing company comes to your home to discuss permitting or inspections, or your contractor gives you many reasons why you should not pull a permit or inspection, this is a red flag that you may be dealing with an unlicensed person,” said OCP Director Eric Friedman.

Plumbing and other home service companies can be creative in hiding their “brokered” relationship. Some red flags consumers can look for to determine if they are potentially dealing with an unlicensed contractor:
What to verify before hiring a contractor: