The Montgomery County Department of Transportation (MCDOT) this week launched the Vision Zero pilot program “20 is Plenty” in North Bethesda. The program will lower speed limits to 20 miles per hour on targeted streets to promote safer roadways for pedestrians and bicyclists.
County Executive Marc Elrich, County Council President Tom Hucker and Councilmembers Andrew Friedson and Evan Glass participated in the ceremonies near Woodglen Drive in North Bethesda. It is one of five local roads that are included in the start of pilot program.

“As we continue to reopen, traffic will increase, which will lead to more cars on the road and pedestrians crossing streets,” said County Executive Elrich. “This is why we must focus on increasing safety measures throughout Montgomery County communities so that we reduce the number of fatalities. In 2019, Montgomery County saw 1,200 speed-induced crashes resulting in 32 lives lost, which is far too many. The 20 is Plenty effort is designed to engage residents and save more lives.” 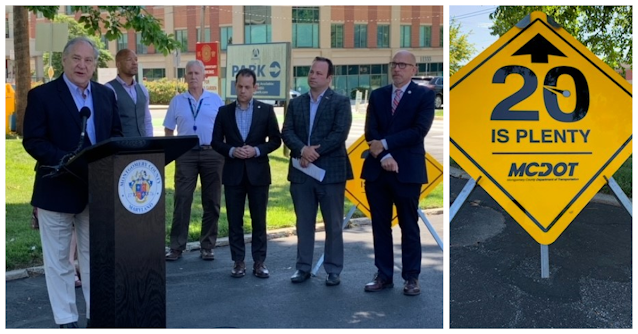 Over the last few years, the 20 is Plenty campaign has set new normal speed behaviors internationally in nations including Canada, Sweden, Scotland and the United Kingdom. Nationally, Montgomery County will be joining approximately six other locations, primarily on the West Coast, which have lowered speed limits to 20 mph on select streets.

"I'm hopeful that this program will be the beginning of a much larger push to slow speeds and save lives," said Council President Hucker. "We are committed to improving safety on our roadways and taking sensible, repeated steps to meet our Vision Zero goals."

MCDOT Director Chris Conklin said: “Speed is a major factor in serious injuries and fatalities on our roadways. The 20 is Plenty approach is intended to encourage lower speeds in areas where motor vehicles mix with pedestrians and cyclists. Lower speed limits and additional signage is intended to make drivers aware of the need to drive slowly and cautiously in these areas and on streets surrounding the designated 20 is Plenty locations.”

During its 2021 session, the Maryland General Assembly passed House Bill 562, sponsored by the Montgomery County House Delegation. The bill authorizes Montgomery County and its municipalities to decrease the maximum speed limit to not less than 15 miles per hour on highways, but only after performing an engineering and traffic investigation.

"20 is Plenty is an important way to build awareness about the dangers of driving at dangerous speeds," said Councilmember Friedson. "Together with physical changes to the roadway that slow down drivers, this initiative can help make our roadways safe for all users—pedestrians, bicyclists and drivers."

Streets included in the pilot program are designated in the Montgomery County Road Code as Urban Roads. The five pilot roadways include:
The program results will be used to determine how, where and if the program should be expanded. ​

The pilot program falls under the County adopted Vision Zero action plan to eliminate serious and fatal collisions on County roadways for vehicle occupants, pedestrians and bicyclists by 2030.
at 8:59 PM