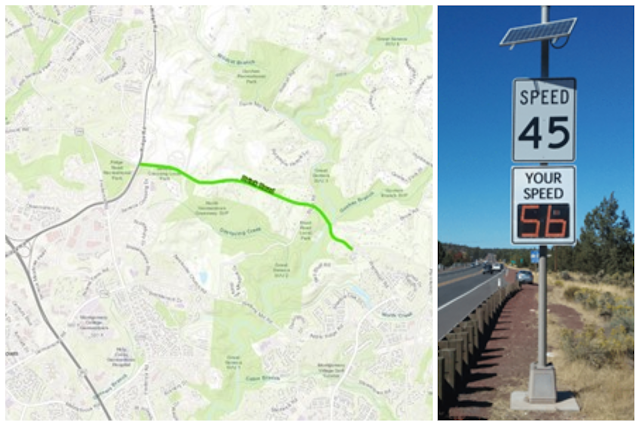 The Montgomery County Department of Transportation (MCDOT) will be installing permanent, “dynamic speed signs” (DSS) on Brink Road in Gaithersburg to provide real-time speeds to drivers. The campaign is a pilot program under the Montgomery County Vision Zero initiative to eliminate severe injuries and fatalities from traffic-related incidents by 2030. Two signs will face eastbound traffic and two will face westbound.
After meeting with area residents and the UpCounty regional services director, MCDOT evaluated the road’s crash history and found several crashes on and surrounding Brink Road that were considered speed related. To develop viable and well-accepted traffic calming solutions, MCDOT is installing the four dynamic speed signs as a pilot program.

If drivers exceed the posted 40 miles per hour speed limit on those sections of Brink Road, the new signs light up and display the vehicle’s speed. The displays intentionally cut off after an established threshold of speed to discourage drivers from intentionally having high speeds register.

As an expanded part of the pilot program, over the next year, several other sections of County roads will have the DSS signs established. These areas will be studied to establish whether long-term dynamic speed sign installations have a significant and long-lasting impact on vehicle speeds.

This effort is part of MCDOT’s comprehensive speed management program. MCDOT recently launched a “20 is Plenty” pilot program, lowering speed limits to 20 miles per hour on targeted local streets to promote safer roadways for pedestrians and bicyclists. Lower vehicle speeds lead to less severe crashes, one of the major tenets of the Vision Zero initiative.

“Achieving motorist compliance with posted speed limits is critical to our Vision Zero goals,” said MCDOT Director Chris Conklin. “In fact, the National Highway Traffic Safety Administration tells us that for more than two decades, speeding has been involved in approximately one-third of all motor vehicle fatalities.”
at 3:12 PM