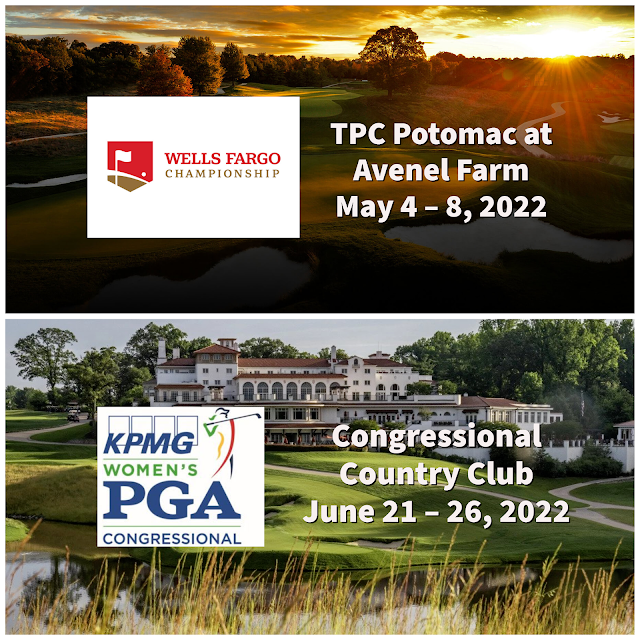 Men’s and women’s professional golf will be returning to the Greater Washington area for the first time in three years with the PGA Wells Fargo Championship to be held May 5-8, at TPC Potomac at Avenel Farm in Potomac and the KPMG Women’s PGA Championship at Congressional Country Club in Bethesda from June 23-26.

The region has not hosted a professional golf tournament since the 2018 PGA Quicken Loans National was held at TPC Potomac. After this year, the Wells Fargo Championship will return to its home base at Quail Hollow Club in Charlotte, N.C. Quail Hollow is hosting the Presidents Cup in September (following a postponement in 2021 because of the pandemic), compelling the PGA Tour to find an alternate site.

Four-time major champion Rory McIlroy, who finished second in the Masters last week, is the defending Wells Fargo champion and is expected to compete in this year’s tournament. Olympic gold medalist Nelly Korda, the 2021 KPMG Women’s PGA Championship winner, is expected to defend her title in June.

Both tournaments are expected to be big boosts to the Montgomery County economy.

“Montgomery County is proud to be hosting the Wells Fargo Championship in May, the KPMG Women’s Championship in June this year and is scheduled to be a host of national tournaments for years to come,” said County Executive Marc Elrich. “Montgomery County’s golf courses attract players from throughout the region annually, and our economy will clearly benefit from these tournaments being hosted in the County.”

The Montgomery County Economic Development Corporation, Visit Montgomery, the Maryland Sports Commission and the Maryland Department of Commerce commissioned an economic impact assessment of hosting a professional golf tournament in the County, with a focus on the Wells Fargo Championship. Sage Policy Group, Inc. did the assessment.

The analysis projected that the 2022 Wells Fargo Championship will generate nearly $30 million overall in economic activity to the Maryland economy, with more than $17 million in visitor spending to Montgomery County, that would not have occurred without the tournament. Statewide, the Wells Fargo Championship is expected to support 249 jobs, more than $10 million in associated labor income, approximately $175,000 in local tax revenues and $1.6 million in income and sales tax revenues for the State of Maryland.

“Not only will the country be watching some of the leading men and women golfers play locally here, but we will also be able to introduce Montgomery County to the world, especially with such expected international fields of players in both tournaments,” said County Council President Gabe Albornoz.

"After a three-year absence and the effects of the COVID-19 pandemic, the appetite for a return of professional golf to the region is very strong,” said Benjamin H. Wu, president and CEO of the Montgomery County Economic Development Corporation. “It’s highly unusual for there to be such a concentration of the world’s best golfing talent in one area in a span of just a few weeks. With two championship tournaments this year, and the PGA’s commitment through the next 15 years, golf will provide Montgomery County with a robust economic contribution through at least 2037.”
at 2:17 PM