Despite Challenges of the COVID-19 Health Crisis, Montgomery County Residents Continue to Give County High Marks for Quality of Life 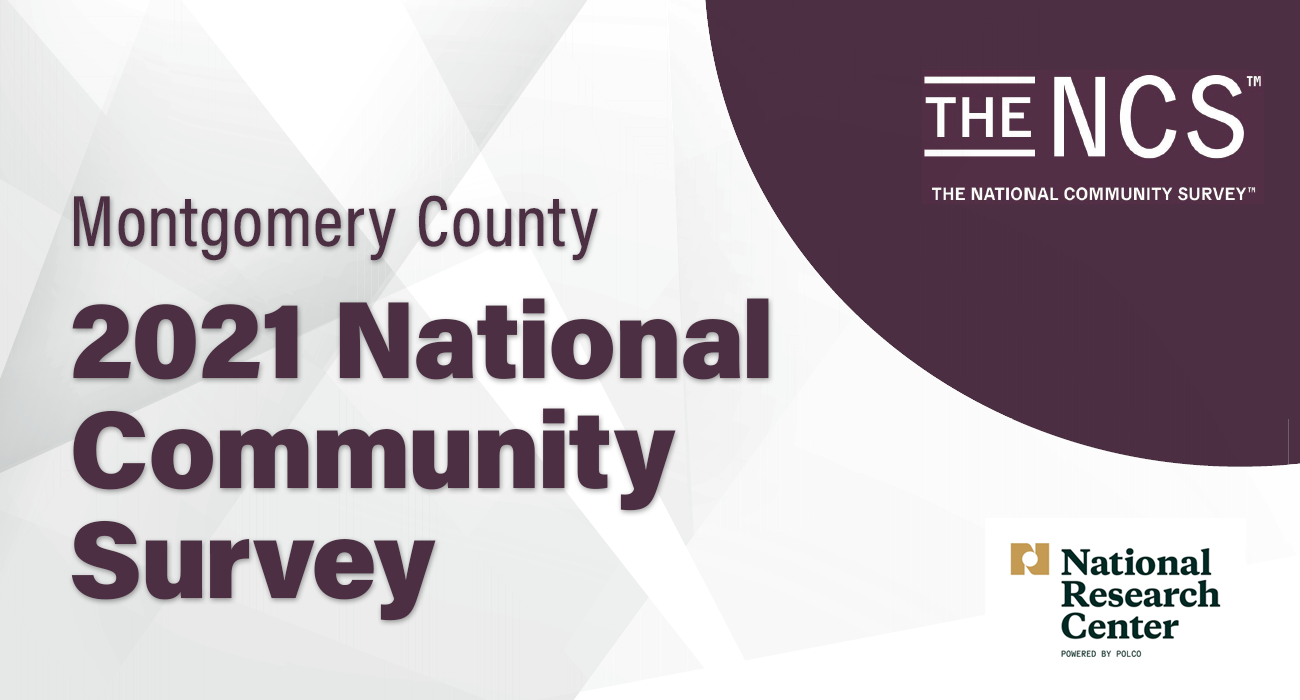 Despite nearly two years of restrictions and other challenges that residents have had to face because of the COVID-19 health crisis, 90 percent of respondents consider Montgomery County an “excellent” or “good” place to live. This is one of the findings of the biannual, independent National Community Survey on the “livability” of Montgomery County, which was commissioned by the Montgomery County Government and released this week.
The survey was conducted between Nov. 29, 2021, and Jan. 17, 2022—during the height of the Omicron variant surge. A representative sample of 565 people were surveyed, and the results reflect residents’ overall perceptions toward Montgomery County with a margin of error of plus or minus four percent. This survey was last conducted in 2019. Despite the impact of the health crisis on so many aspects of life during the past two years, there were not significant changes in how residents view their quality of life.

“The last two years have been very tough for our residents and County employees,” said County Executive Marc Elrich. “We worked hard to keep people safe from COVID-19 while delivering essential services to our residents during the pandemic. The results of this survey are reassuring that our efforts had a positive impact on people’s lives. The findings of the survey are particularly encouraging since the research was conducted right in the middle of the Omicron variant surge. The increases in favorable responses to questions about the County’s livability and quality of life are a testament to the role our government has played in supporting and protecting our residents through these challenging times.”

The survey was conducted by the Boulder, Colorado-based Polco/National Research Center, which conducts hundreds of similar surveys for jurisdictions of all sizes around the nation. The center administered the County’s 2007, 2009, 2017 and 2019 surveys. There was a break in service between the 2009 and 2017 surveys due to budget constraints brought on by the Great Recession.

This year’s survey was the first time the number of languages the survey was offered in were expanded. In previous years there were three languages (English, Spanish and Chinese) and this year, Korean, French, Vietnamese, Farsi, and Amharic were added in recognition of the diversity of the County.

Click here to view the full results of the survey.

Results showed that 77 percent of survey respondents rated the overall feeling of safety positively. Public Safety services such as fire protection, ambulance/EMS, fire prevention and education received praise from 90 percent of respondents and three quarters are pleased with the sheriff/police services and animal control.

Highlights regarding the economic health of the County include:
Education, Arts and Culture were praised by residents. Some highlights include:
The survey also found some areas that allow room for improvement. Those included safety, housing affordability and mobility. Some safety ratings decreased since the last survey.

The 2021 biannual resident survey was conducted through mail outreach to 5,000 randomly selected County households. The data collection period ran from Nov. 29, 2021, through Jan. 17, 2022, and the overall response rate was 12 percent.

In addition to the random-sample survey, to ensure inclusivity and openness, the County issued the same survey to any County resident who wished to take it. The “opt in” open participation survey period was Dec. 22, 2021, through Jan. 17, 2022. There were 5,246 responses. These responses are included in the final report and are treated as a separate dataset.