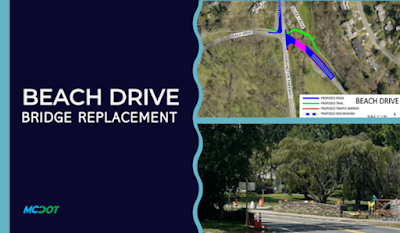 The construction project on Beach Drive in Kensington, between Kensington Parkway and Old Spring Road, has been accelerated by the Montgomery County Department of Transportation (MCDOT) so that a two-lane vehicle bridge can be replaced and the road reopened by April 1. The road has been closed since Aug. 30.

Since the project began, traffic has been detoured through MD 185 to MD 192 to Stoneybrook Drive and Beach Drive. The roadway is now scheduled to be reopened to traffic on April 1, although the contractor will be performing final paving, striping and landscaping in early July.

A new pedestrian bridge constructed as part of the project was opened on Sept. 1.

To meet the new accelerated construction schedule, additional crews are being added. Construction will take place Monday through Friday between 7 a.m. and 5 p.m. and may include Saturday work. Residents living near the site may hear construction-related noise during these hours.

A 2020 bridge inspection revealed that the bridge’s steel arches are in poor condition. The south parapet has been removed above two arches and temporary concrete traffic barriers were put in place. The project, which will allow the bridge to be restored to full capacity, is being partially funded with Federal funds.