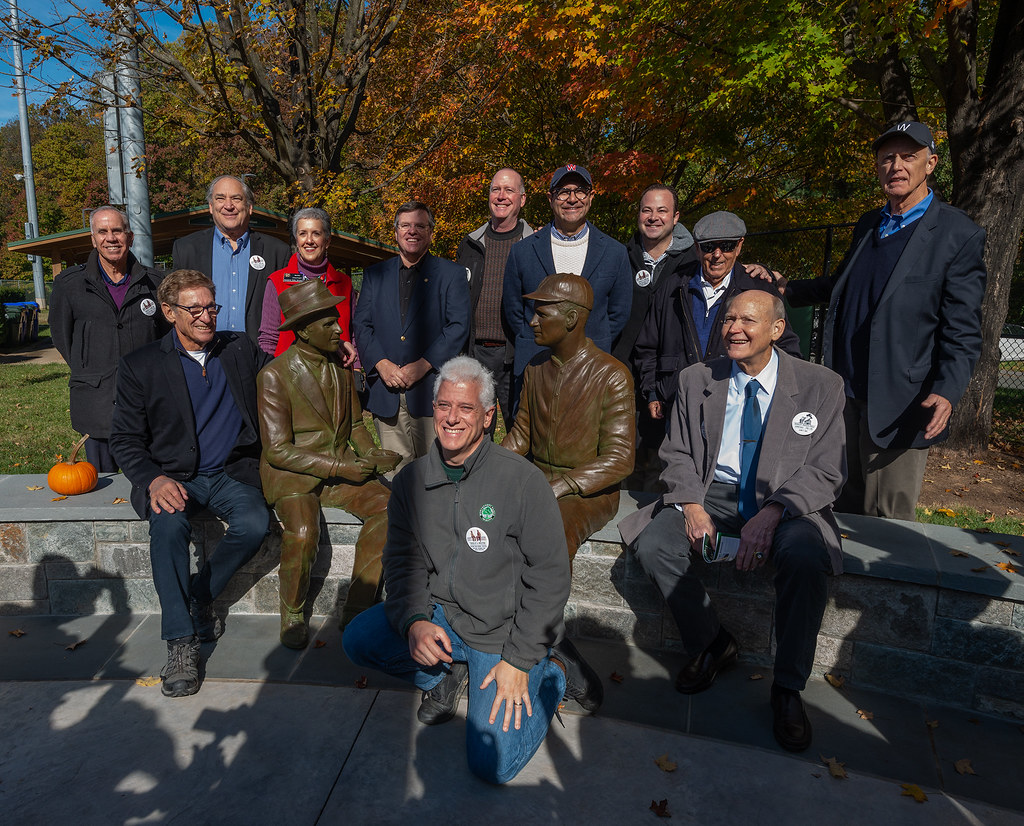 A life-sized bronze sculpture honoring famed Washington Post sportswriter Shirley Povich and Baseball Hall-of-Fame pitcher Walter Johnson was unveiled on Nov. 6 at Shirley Povich Field at Cabin John Regional Park in Bethesda. Montgomery Parks, which is part of The Maryland-National Capital Park and Planning Commission, and the Bethesda Community Base Ball Club, organized the ceremonies.
The sculpture was commissioned by the Bethesda Base Ball Club. It was created by Maryland-based and nationally acclaimed artist Antonio Tobias “Toby” Mendez.

Mr. Povich's sports column ran in The Post on for 74 years, or since he began working there in 1924, at age 19. He died in 1998. He wrote more than 15,000 columns over seven decades. Mr. Povich won numerous prizes for his writing, from the Grantland Rice Award to election to the writers' wing of the Baseball Hall of Fame.

Mr. Johnson won 417 career games for the Washington Senators, second all-time to Cy Young. His 110 career shutouts are first all-time. Known as “The Big Train,” he won most valuable players awards in 1913 and 1924. He played in the World Series in 1924 and 1925. His stretch of 56 consecutive scoreless innings was a record that stood until 1968. He was named as an inaugural member of Baseball Hall of Fame in 1936. Mr. Johnson became a resident of Germantown and passed away on Dec. 10, 1946. He is buried in the Rockville Union Cemetery.

“These sculptures are a wonderful and meaningful addition to Shirley Povich Field, one of the gems in Montgomery Parks system,” said Mike Riley, director of Montgomery Parks. “Bruce Adams and Bethesda Base Ball Club have been wonderful partners in helping to create this field of dreams for so many players and families to enjoy.”

“He (my father) said he loved Walter Johnson because it was the manner of his manhood,” said Maury Povich. “The fact that he was the most honest, the most humble and the most humane of any athlete that he had ever been around, and that’s why he was so, so marvelously attached to Walter.”

Walter Johnson’s grandson Hank Thomas recalled how the sculptures symbolize the relationship between Povich and his grandfather.

“This beautiful sculpture is literal in that this scene took place countless times over the years and represents an association between these two men and now between our families that goes much deeper and broader and longer than anybody would imagine,” said Mr. Thomas. “It’s almost 100 years now.”

The event in its entirety is available to watch on MyMCMedia’s YouTube channel.
at 7:20 AM