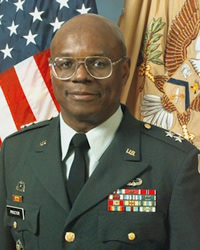 Major General Hawthorne Proctor, the first African American to serve as quartermaster general in the U.S. Army, will be the featured speaker on Saturday, Nov. 13, as the NAACP’s Montgomery County Branch Armed Forces and Veterans Committee hosts an event at the Rockville Memorial Library to salute veterans. The event, from 11 a.m.-5 p.m., will include the screening of three documentaries.

The Montgomery County Office of Human Rights, the Montgomery County Association for Black Veterans and the African American Health Program’s COVID Response program are co-sponsoring the event. The Rockville Memorial Library is located at 21 Maryland Ave. at Rockville Town Square. The free event will be in Room 2.

The event will follow all COVID-19 health protocols to keep attendees safe.

Linda Plummer, president of the Montgomery County Branch of the NAACP, will offer opening remarks at 11 a.m. Elected officials and agency directors also will help open the event.

The first documentary to be screened, starting at 11:30 a.m., will be Veterans of Color: Courage, Adversity, Triumph from the Beaches of Normandy to the Jungles of Vietnam. At 2 p.m., the documentary screened will be Red Tails and Inspiring Interviews from the Real Tuskegee Airmen. At 3:30 p.m., there will be a first screening of Gloria White Garden and the Muskegon Great Lakes Submarine Annual Dinner and Presentation of the Tuskegee Veterans Award. Discussions will follow each documentary.

Major General Proctor entered the U.S. Army with a second lieutenant's commission in 1969. Quickly promoted to captain, he served as a logistics officer during the Vietnam War from 1971-73.

After additional training, Proctor served four years in supply capacities with the 25th Infantry Division at the historic Schofield Barracks in Hawaii, followed by a short deployment in South Korea. He spent the rest of his career in various supply and personnel commands in the U.S.

In 1999, Major General Proctor achieved the rank of quartermaster general. He retired in 2004 with numerous commendations, including the Distinguished Service Medal and the Bronze Star.