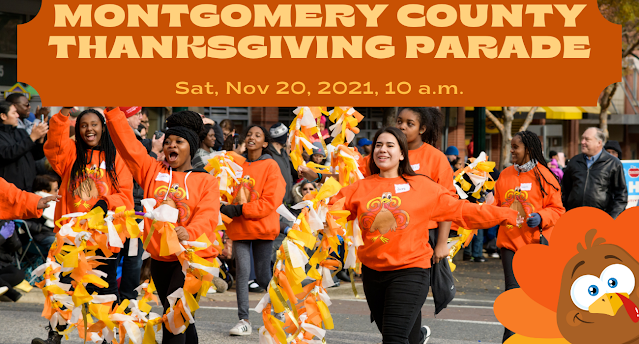 The Montgomery County Thanksgiving Parade will usher in the holiday season on Saturday, Nov. 20, in Downtown Silver Spring. The parade kicks off at 10 a.m. with the thrilling sounds of marching bands, spinners with gold and orange hoops and streamers and Thanksgiving-themed costumes and units—as well as a 12-foot turkey. Brian van de Graaff, an ABC7 meteorologist, will return as the parade emcee.

Special performances as part of the festivities will include dances from The Nutcracker’s The Waltz of the Flowers by the Maryland Youth Ballet and Akhmedova Ballet’s choreographed interpretation of ice skating at the Silver Spring Rink.

Individuals who are interested in participating in the parade (not as marching units) are encouraged to volunteer. The parade is always looking for volunteers to be snowmen, nutcrackers and penguins in the parade or to lead balloons. Volunteers ages 13 and older can dress up in costume, act as unit leaders or be balloon handlers. This year’s need for adult volunteers is particularly high, as the parade normally has many student volunteers, but those numbers have the potential to be lower due to the COVID-19 health crisis. The hours on parade day for volunteers are from 7:30 a.m.-1:30 p.m. (volunteers need to be present during the entire time).

All attendees are encouraged to wear masks to keep themselves and fellow community members safe.

More information about the parade, including how to be a volunteer participant, can be found at https://www.silverspringdowntown.com/montgomery-county-thanksgiving-parade. Information also is available by calling MC311 at 3-1-1 (or 240-777-0311 if outside the County) Monday through Friday from 7 a.m. to 7 p.m.
at 8:39 AM