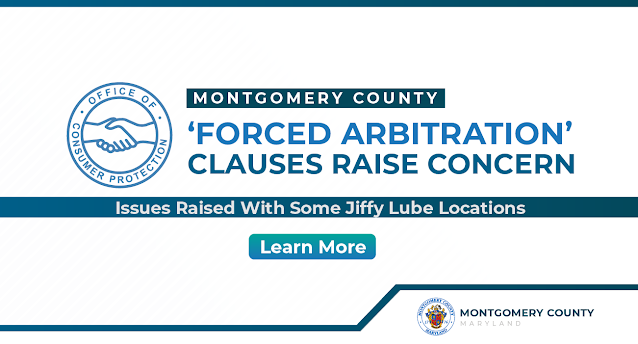 Montgomery County’s Office of Consumer Protection (OCP) is alerting consumers about potentially deceptive and misleading information in the receipts that some Jiffy Lube® locations provide for purchasing oil changes or auto repair services.

The failure to fully disclose that a customer must pay the merchant’s attorney to resolve any disputes is misleading and deceptive,” said OCP Director Eric Friedman. “Impartial mediation and arbitration services may sometimes be an equitable way to resolve disputes. However, requiring a consumer to unknowingly pay for mediation and arbitration that is one-sided and biased is clearly unconscionable. Such clauses may seek to take away a consumer’s right to file a lawsuit in Small Claims Court or to participate in a class action lawsuit.

OCP became aware of Jiffy Lube’s forced arbitration clause during the course of investigating complaints from two consumers alleging that their vehicles were damaged as a result of improper oil changes. Efforts were made to conciliate the matter with the merchant and his attorney.

OCP has grown concerned about the increasing practice of merchants in many different industries using mandatory mediation or arbitration clauses in an effort to prevent consumers from exercising the right to file claims against merchants in any court. Clauses also seem to deny consumers the right to participate in any class action lawsuits.

When making any type of purchase, OCP warns consumers to be careful not to accept mediation or arbitration services that are unfair and detrimental to their interests.