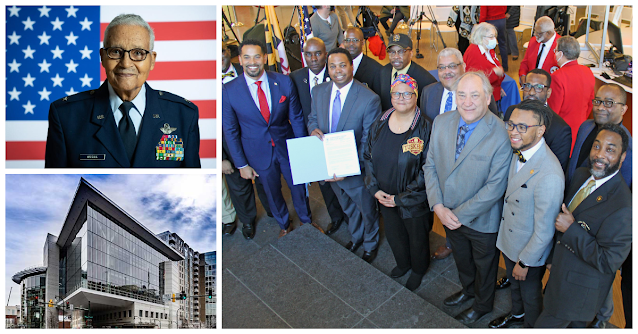 Montgomery County Executive Marc Elrich has signed a bill that will enable the County to rename the Silver Spring Library as the “Brigadier General Charles E. McGee Library.”

The bill signing ceremony was held on Feb. 28 at the library at 900 Wayne Ave. in Silver Spring.

“There is no better way for us to conclude Black History Month than by memorializing a Montgomery County resident who was an American hero, a trailblazing African American, and a man who lived an extraordinary life,” said County Executive Elrich. “We are renaming this building for Brig. Gen. McGee because of the example and opportunities he provided to the generations who followed in his footsteps. Thank you to Councilmember Jawando for championing this effort and to Department of General Services Director David Dise and MCPL Director Anita Vassallo for their support and efforts to quickly get all the work done to enable this renaming.”

Brig. Gen. McGee, who passed away earlier this year at age 102, served as a fighter pilot and member of the all-Black 332nd Fighter Squadron, famously known as the “Tuskegee Airmen.” He served during World War II and also flew combat missions in the Korean and Vietnam wars.

His feat of flying combat missions in three major ways was unthinkable before his career began as the U.S. military had banned African Americans from combat flying roles.

"Brigadier General Charles E. McGee was a man of honor, integrity and kindness,” said Councilmember Jawando. “It had been my great honor to get to know him and his family over the last 20 years. The general fought against racism and for equality his entire career and served as a mentor and role model to me and so many others in our County. I am proud we are able to honor his legacy and by announcing the Brigadier General Charles E. McGee Library. I want to thank County Executive Elrich for his partnership in this effort."

More about the life and experiences of Brig. Gen. McGee can by found at the Smithsonian Air and Space Museum website at https://airandspace.si.edu/stories/editorial/life-dedicated-service-remembering-brigadier-general-charles-mcgee.

View photos from the Feb. 28 event here. A dedication ceremony for the renamed building will be held later this year.