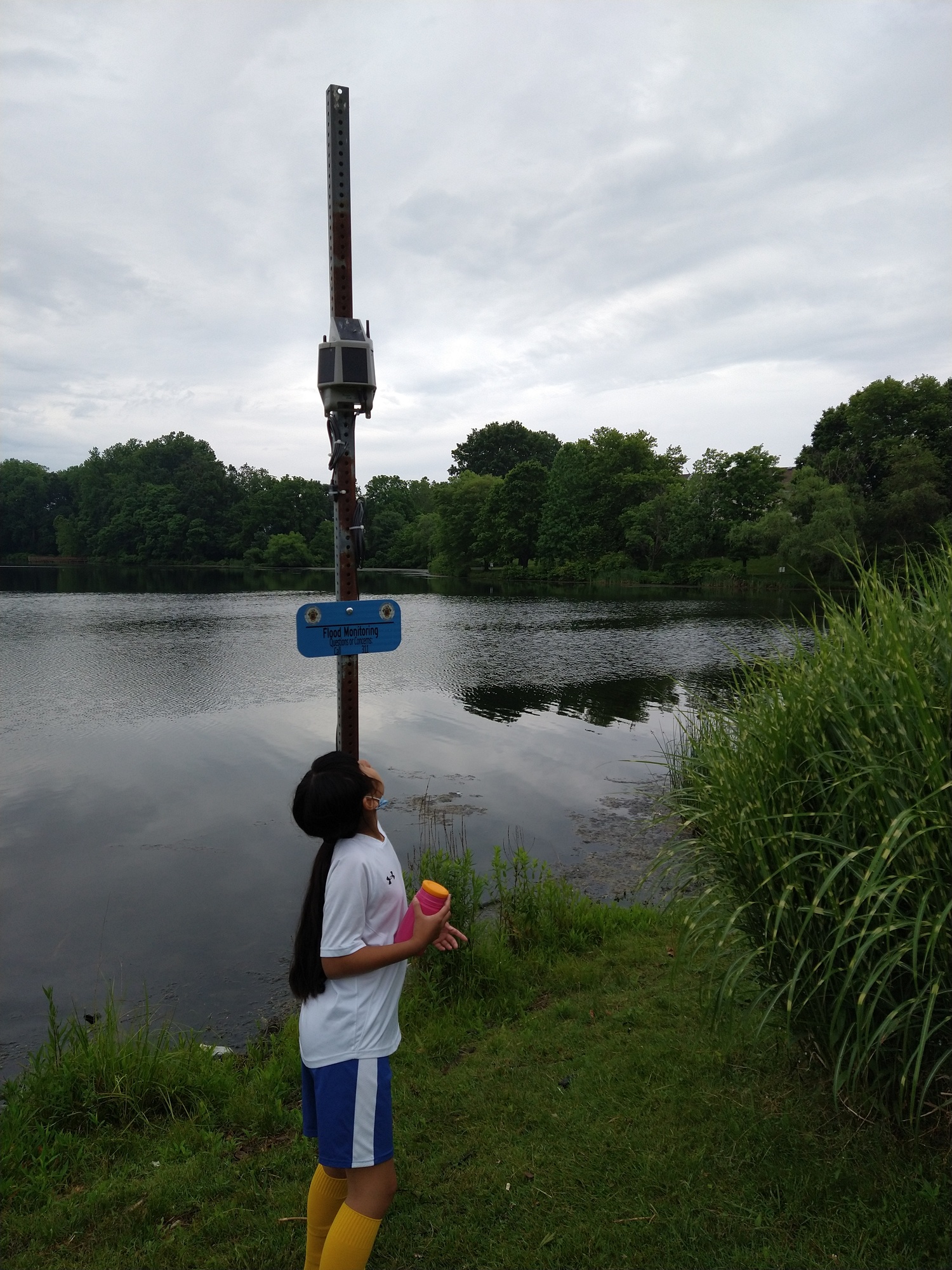 Montgomery County recently showcased its expanded early warning Flood Sensor Program that can alert residents sooner about flooded roadways, potential dam failures and streams overflowing their banks. Montgomery County Executive Marc Elrich was among those at a demonstration of one of the 35 high-tech sensors in Germantown. The U.S Department of Homeland Security (DHS) Science and Technology Directorate is providing the County with the sensors.

The sensors detect rising water levels and provide early warnings about high water or flooding. They are being installed at flood prone sites across the County. Each sensor is solar powered and has an internal battery to maintain operations during inclement weather. The sensors use a tethered node that is placed underwater. The node detects the amount of pressure placed upon it by the water and calculates the depth of the water. Every five minutes, data is sent from the sensor by a cell phone card to a master display. A small color camera also sends images back to the main display. Every location has pre-determined thresholds for water depths for the sensor to alert that water levels are approaching or exceeding flood stage. If they are, a crew is sent to investigate the potential flooding and whether a low-lying road needs to be cleared, or if an Emergency Action Plan for a dam needs to be activated.

The Montgomery County Department of Environmental Protection (DEP) led the effort to get the sensors and the County’s Office of Emergency Management and Homeland Security (OEMHS) worked on a Cooperative Research and Development Agreement with DHS and Intellisense Systems Inc., the company that makes the devices. The County will share the data gathered by the sensors with the company and DHS to improve sensor design based on user feedback.

“This partnership between DHS and the County is critical to our efforts in warning Montgomery County residents about dangerous and life-threatening floods,” said County Executive Elrich. “Just a few weeks ago, heavy rain caused flash flooding that left several drivers stranded in their vehicles in Bethesda. Flooding also led to road closures in parts of the County. Luckily, no one was seriously hurt. The County is no stranger to this kind of weather event, but now that we have these flood sensors, we can notify residents sooner of where flooding is happening so they can avoid danger.”

DHS today provided OEMHS with one more sensor. This one will be installed at Rock Creek Woods Apartments in Rockville where a 19-year-old man died in flooding last September.

County Fire Chief Scott Goldstein said the Fire and Rescue Service is among the first to respond when flooding issues occur and threaten the safety of residents.

“Whenever heavy rain and flash flooding are predicted, rescue crews in the County have prepared for the inevitable,” said Chief Goldstein. “In the past, several areas have been susceptible to flooding and have put residents at risk, but now we have tools in our toolbox that can provide us early warning in order to prepare resources to respond to emergencies—and more importantly—alert Montgomery County residents that live and travel in those areas.”

Heavy rains that cause flooding are becoming harder to anticipate due to the impacts of climate change.

“Because of climate change, we are seeing more frequent and more intense rainfall,” said Acting DEP Director and County Climate Change Officer Adriana Hochberg. “These high-tech flood sensors are a crucial tool in managing the effects of a warmer planet.”

“The Montgomery County Department of Transportation designs, constructs and maintains County roadways,” said Department Director Chris Conklin. “When a flooded County roadway is reported, we close off the road and activate the Storm Operations Center, known as SOC, to get the word out to other departments and the community. These flood sensors will automatically detect rising water levels and provide early warnings giving us a head start on our response. As storms and flooding events have become more aggressive with climate change, early detection is key to protecting critical infrastructure, reducing property losses and most importantly protecting the health and safety of our residents.”

The summer season produces the highest rainfall in the Washington Region. The National Severe Storms Laboratory reports that more people are killed each year in the nation by flooding than are killed by tornadoes, hurricanes or lightning.

“The signed agreement between Montgomery County and the Department of Homeland Security will allow for faster, more-efficient detection of flooding at high-hazard dams and low-water crossings,” said County OEMHS Acting Director Marianne Souders. “This will enable public safety officials to take quicker action to protect lives and property.”

For more information on preparing for heavy rain and potential flooding in the County, visit https://montgomerycountymd.gov/OPI/alerts/flooding.html

Sensors have been installed in 22 locations. An additional 13 sensors will be established. The locations of the installed sensors are: