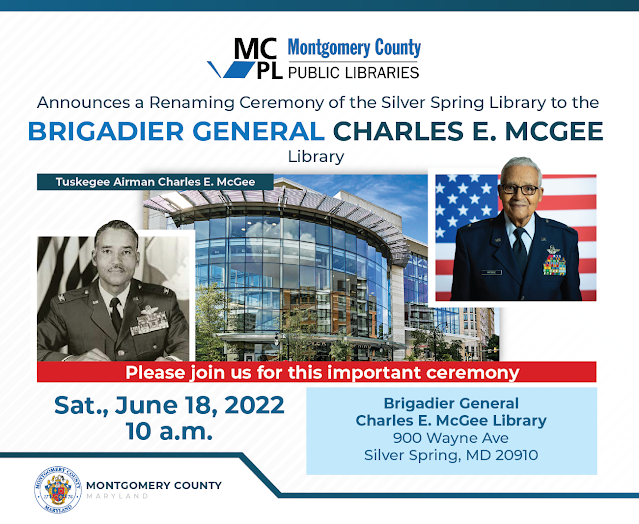 The renaming of the branch follows an executive order signed by County Executive Elrich on Feb. 28 to honor the achievements and life of Brig. Gen. McGee, who was a County resident and passed away at age 102 on Jan. 16. He served as a fighter pilot and member of the 332nd Fighter Squadron, famously known as the “Tuskegee Airmen,” an all-Black unit in World War II. He later flew combat missions in the Korean and Vietnam wars.

Brig. Gen. McGee fought against racism and for equality throughout his life and paved the way for many African American service members. Brig. Gen. McGee prioritized learning and engaging with young people and served as a role model locally and nationally

The event will include musical performances and other entertainment, as well as an exhibit of artifacts and photos from Brig. Gen. McGee’s collection.

Representatives of the Montgomery County Commission on Veterans Affairs, Tuskegee Airmen, Inc. and the Alpha Phi Alpha Fraternity, Inc. also are expected to participate in the ceremonies.
at 11:40 AM