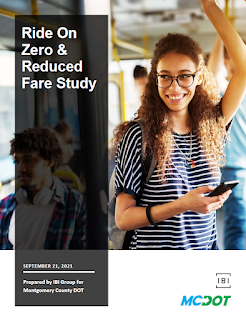 Montgomery County Ride On bus fares will remain free through Jan. 1 following a recommendation by County Executive Marc Elrich that was approved this week by the County Council. County Executive Elrich has supported using the period to look at the “Fare Equity Study” conducted by the County Department of Transportation (MCDOT).

Like most other regional bus services, MCDOT temporarily instituted free fares with the onset of the COVID-19 health crisis. However, when many other transit agencies in the region resumed fare collection, Ride On continued its “fare holiday” to extend free service.

The Fare Equity Study examined potential fare scenarios in comparison to reimplementing the pre-existing $2 bus fare. The study’s recommendations are based on how fares would impact low-income and economically vulnerable residents, reduce barriers to access transit and improve overall ridership long-term.

Based on the findings of the study, County Executive Elrich is recommending that the Council implement a reduced standard fee to $1 and retain fare-free programs such as Kids Ride Free and Seniors and Persons with Disabilities Ride Free. The study recommends the balance of benefits and costs, with benefits primarily accruing to the populations the County is hoping to support.

“Equitable transit access is at the forefront of everything we do,” said MCDOT Director Chris Conklin. “We appreciate that the County Executive and Council have taken the time to allow for a thorough review of impacts before making a long-term decision on bus fare.”

On Sept. 23, the board of directors of the Washington Metropolitan Area Transit Authority (WMATA, or Metro) discussed a reduced fare policy for its operations, including consideration of a $1 fare for Metrobuses.

“Reducing Ride On fares helps our low- and fixed-income residents who often must travel by transit; it helps address equity gaps and supports public transit, which is good for our environment,” said County Executive Marc Elrich. “This County is too expensive to afford for those who don’t earn a lot - we must keep transportation costs for these residents to a minimum. I support a $1 standard fare while retaining our fare-free programs such as Kids Ride Free and Seniors Ride Free, which also includes members of our disabled community. This approach balances benefits and costs, and these benefits primarily accrue for populations we want to support.”
While instating a $1 fare is a recommendation for immediate action, MCDOT was advised by WMATA that the actual implementation of a changed fare requires a minimum of 60 days to take effect in the Smartrip system. The timing restrictions place the earliest possible new fare around Jan. 1. If the $1 fare is adopted by January, implementation would allow for needed system changes and rider notification.

The study has been posted online at, https://www.montgomerycountymd.gov/DOT-Transit/fare-equity/.
at 1:06 PM