‘Unwritten Law: A Symposium on the Lynchings in Rockville’ Webinar to be Presented on Saturday, Sept. 25 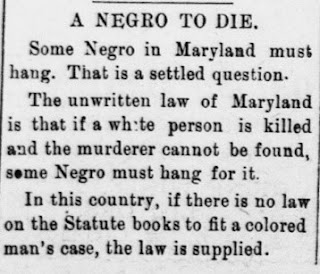 The historical analysis will provide background on the economic, social and political context of Montgomery County in the final decades of the 19th Century and explore how elements of the murders were replicated in other parts of Maryland and the United States.

The symposium will include the following sections:
To register for the webinar, go to https://us02web.zoom.us/webinar/register/WN_A0rV6tJRTZ2MMmYTtZle1A.

Included in the weekend will be the Remembrance Pilgrimage Walk from noon-3 p.m. on Sunday, Sept. 26. Beginning at the site of the old County jail where Mr. Diggs-Dorsey and Mr. Randolph were both held, the walk will pass locations that were then central to a vibrant African-American community, including the sites where the men were lynched.

After the walk, from 4-5:30 p.m., Montgomery History will host the “Soil Collection Ceremony.” The ceremony will honor the memories of Mr. Diggs-Dorsey and Mr. Randolph with a soil collection and music. It also will have reflections by community leaders and by a representative of the Equal Justice Initiative from Montgomery, Ala.

More information on Remembrance Weekend can be found at https://montgomeryhistory.org/remembranceweekend/.